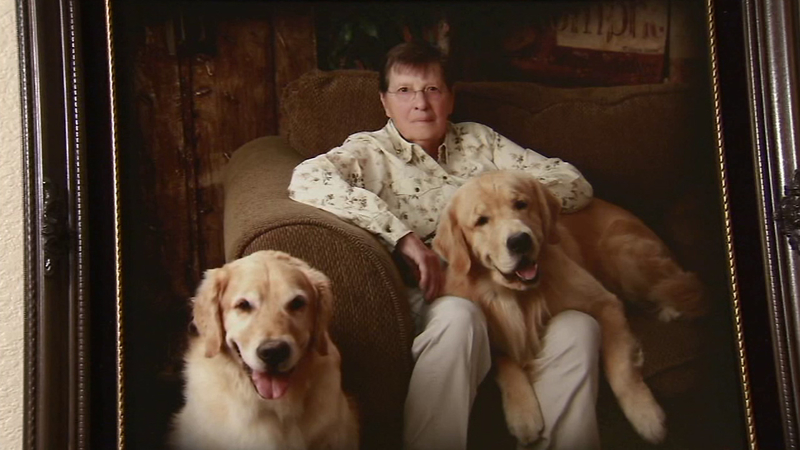 PALMDALE, Calif. (KABC) -- Judy Muhe gets emotional when she talks about how her two dogs saved her life. Muhe, 76, was in and out of consciousness for two days after falling in her kitchen.

"They went for days without food and water. They stayed with me," she said. "By keeping me warm, and keeping me comfortable, as they could, the main thing was they let me know that I was not alone."

Muhe says if her dogs had not kept her warm on the cold floor, she fears she might have died. Muhe has Parkinson's disease, and the cold can be very dangerous for her.

"Dodger kept nuzzling me with his nose and he (the second dog) was laying beside me. I don't know what I would have done without them," she said, crying. "I'm sorry. I just love my dogs so much."

Muhe's close friend, Kathy Jacobs, says she repeatedly called Muhe during those two days. After not hearing from her, Jacobs and her husband used a spare key to get into Muhe's home.

"When I came in we found her right away on the floor. The dogs were right here with her. They actually ran to the door and then they ran back to where she was, like showing us she was there," said Jacobs.

Muhe bruised her head and suffered a shattered shoulder in the fall. She has undergone two surgeries for the injured shoulder. Jacobs says at least her friend is alive, thanks to her dogs.

"Because of her injuries and the time she spent laying on the floor and dehydrating, and being with her Parkinson's, we probably would have lost her," Jacobs said.

Muhe is grateful for her so-called angels on four legs. She wants everyone to be good to their pets.

"My guardians, yes. And I have no doubt they would do it again," she said.