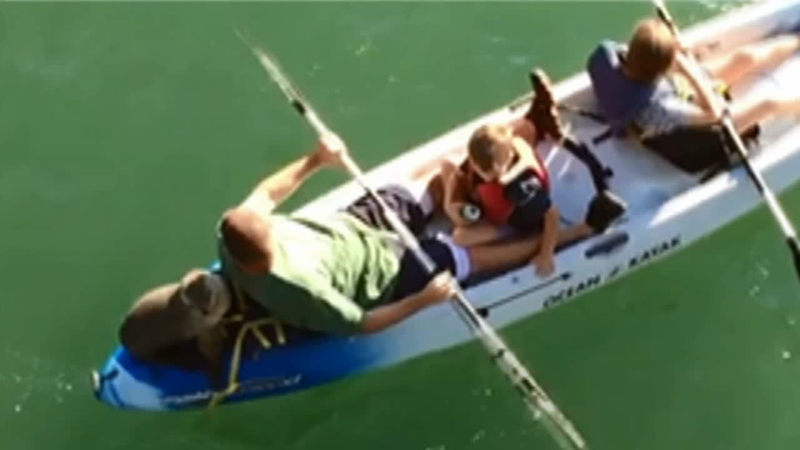 SANTA BARBARA, Calif. (KABC) -- An Orange County family had an unexpected passenger join them on a kayaking trip in Santa Barbara on Valentine's Day.

A sea lion pup jumped aboard the back of the kayak and had a fun ride on the water with the family.

Rodney Gist was in one kayak with his 10-year-old daughter and 5-year-old son.

"I could feel something on the kayak, because it kind of rocked a little. I looked back, and there was a little sea lion on there," said Gist's daughter, Leelee.

The family says they just talked to the sea lion like they would with a dog, saying, "Here boy, here boy."

"Next thing I know, he's snuggling up next to me," said Gist.

Gist's wife and 8-year-old daughter were watching from another kayak.

"My wife was somewhat freaking out, I think, about the experience," said Gist.

The seal lion pup didn't seem to want to leave.

"About five, 10 minutes in, I was able to touch him and pet him. He was putting his head up underneath my arm, trying to get on my lap," said Gist. "I thought he was going to be slimy. He was more like a dry, short-haired dog is what it felt like."

The sea lion hung out for about an hour and a half.

"We finally brought him into shore. We returned the kayaks. He rode with us all the way in," said Gist.

Once near the shore, Gist says the crowd seemed to startle their new friend. They said goodbye, and he went on his way.

Looking back on the holiday outing, the family agrees it will be hard to top.

"It was absolutely incredible. We had a great time with the family. It was an experience we couldn't ever duplicate," said Gist.