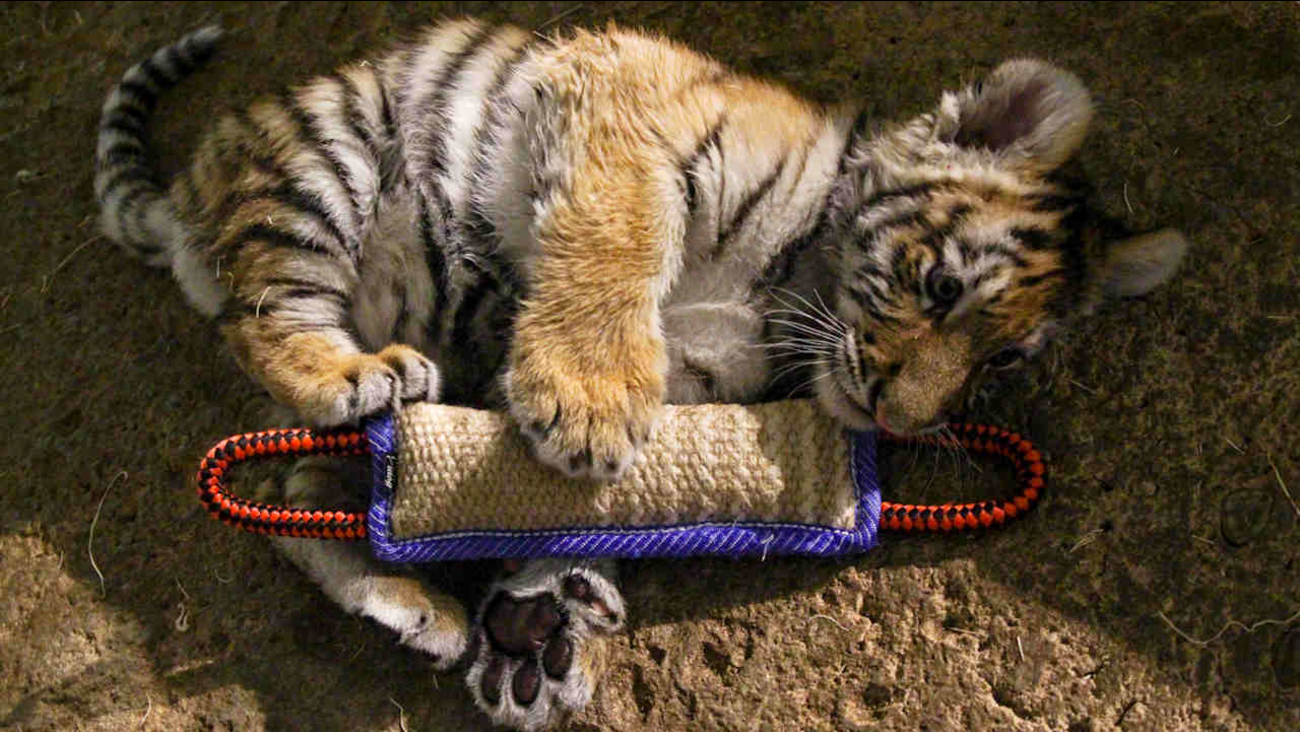 AP
MILWAUKEE, Wis. -- The zookeepers at the Milwaukee County Zoo are hand-raising a lone Amur tiger cub -- an unusual undertaking only done in order to save the cub's life.

Vets and zookeepers had to give special one-on-one care to then-10-pound cub named Kashtan after he developed an infection that killed one of his three sisters.

They had considered returning him after about a week, but they didn't trust mother Amba would allow him to be removed five times a day for feedings.

After he recovered about a month later, they didn't know if Amba would still recognize him or if she would protect her other cubs because he had been sick, said Katie Kuhn, area supervisor of Big Cat Country at the Milwaukee County Zoo.


It's not ideal but the zoo's vet, Dr. Vickie Clyde, said then-four-week old Kashtan would have died if they had not removed him. And his situation helped with early detection of the same infection in his sister Bernadette that allowed her to stay with Amba and sister Eloise.

A small percentage of mothers neglect or reject cubs -- requiring zookeepers to step in -- but officials usually look for orphaned cubs at other accredited zoos so they can be raised together, said Tara Harris, the coordinator of the Tiger Species Survival Plan, which among other things matches tigers based on their genetics for breeding.

She's also vice president of conservation for the Minnesota Zoo.

But there were no other cubs around the same age. So it's unusual he is being raised alone, Harris said.

Zookeepers are visiting him four times a day to play and hand feed him horse meatballs. They also bring his sisters for three hours a day -- so he doesn't forget he's a tiger.

"He needs to learn when another tiger is telling him to back off," Kuhn said.

Harris said little is known about cubs raised with only intermittent time with other tigers, and how that might affect a pairing with a female later.

"I don't anticipate any negative effects but every tiger is different and has its own personality," Harris said.

But within the next month or so, they will stop going in because he will be too big and strong for them to be safe, Kuhn said.

Harris said Amur tigers are incredibly endangered so it's important to save him.

"It's great the Milwaukee County Zoo is able to save this tiger and find a way to let this tiger be with his siblings and learn to be a tiger," she said.

According to the World Wildlife Fund, there are nearly 3,900 wild tigers, mostly in Asia, compared with an estimated 3,200 in 2010.
Related topics:
wisconsinzooanimalnational
Copyright © 2020 by The Associated Press. All Rights Reserved.
More Videos
From CNN Newsource affiliates
TOP STORIES