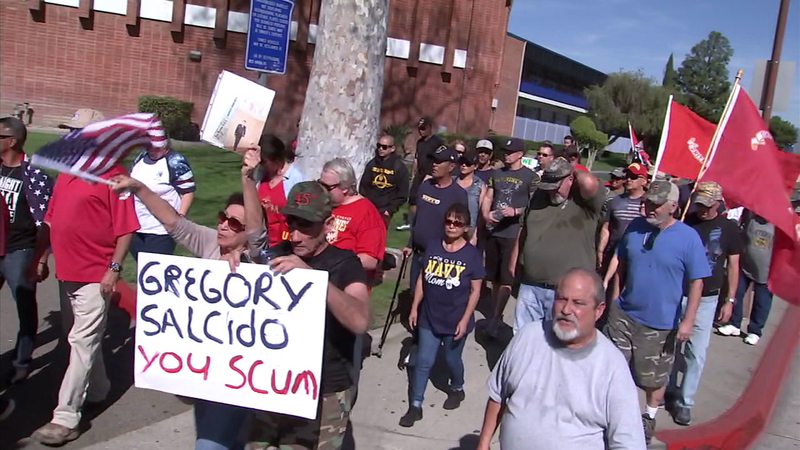 PICO RIVERA, Calif. (KABC) -- Roughly 100 veterans and military supporters staged a demonstration Friday outside El Rancho High School in Pico Rivera over an anti-military rant made by a teacher.

The comments were made during a history class. A student secretly recorded teacher Gregory Salcido telling the class that people who join the military are stupid.

You can't see Salcido in the video, but the El Rancho Unified School District confirmed it is Salcido talking.

On Friday, the demonstrators called for the school district to fire Salcido.

"He's going to have to resign, move out of the city," said Jason Powell, an El Rancho graduate and Navy veteran. "He can have a job somewhere else."

Salcido is also a Pico Rivera city councilman. Fellow Councilmember David Armenta said the embattled teacher needs to step down from both positions.

"No one should indoctrinate and try to brainwash our kids, who are so impressionable at such a young age," Armenta said.

But not everyone is standing against Salcido.

Alexis Hernandez graduated from El Rancho last year and had Salcido as a teacher.

"I think he's a great guy, he's an excellent teacher," Hernandez said. "I just think this whole thing was taken out of context. I wouldn't do this for a lot of people, but for him I would."

The father of the young boy who recorded the video said he is worried about people on both sides of the issue, especially if it becomes violent.