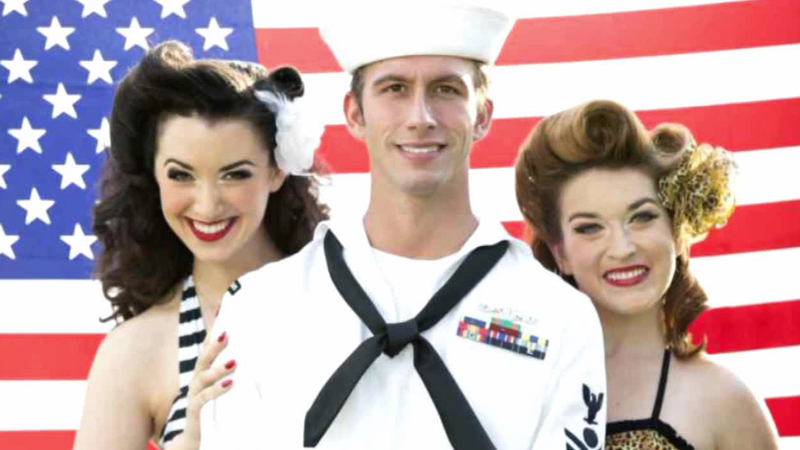 WESTWOOD, Calif. (KABC) -- The Crest Theatre is hosting a sexy and provocative burlesque show on Saturday in the name of charity.

It's a fundraiser for a non-profit called "Pin-Ups for Vets," founded by Gina Elise, who started out by making calendars featuring real-life veterans re-creating the signature pin-up look of the 1940's.

"My grandfather was a World War II Army veteran and this project is a tribute to his service," Elise said.

"Pin-ups were painted on aircraft during World War II to boost morale of the veterans. I wanted to take that concept and bring it into today to raise money for our troops and veterans," she added.

Elise hand-delivers copies of the calendars to hospitalized veterans.

"Its like a piece of history walking into their room. It really gets their mind off the hospital," she said.

She's also raised more than $50,000 worth of rehabilitation equipment for wounded warriors.

Ryba is featured in the 2015 calendar, and his military buddies are jealous he got to work with so many beautiful women.

"Everybody keeps asking, 'How do I get your job? Where do I sign up?' I said, 'Sorry buddy, I'm not leaving,'" he joked.

"You can never knock a day you can hang up with some beautiful girls," he said.

While in the Navy, Watson learned to tap dance aboard a submarine. He is expected to show off those talents as part of the fundraising show.

The burlesque group "Working the Tease" is also performing.

"There are very few causes as a burlesque performer you can get behind and really make a difference and one of those things is boosting morale for our troops," show producer Julia Reed Nichols said.

The theater has also announced future shows to support "Pin Ups for Vets" on the first Saturday of every month.

For tickets or to buy a calendar, head to pinupsforvets.com.