The plane was able to land safely, and the flight instructor and student pilot on board declined medical treatment.
AP
By Paul Davenport 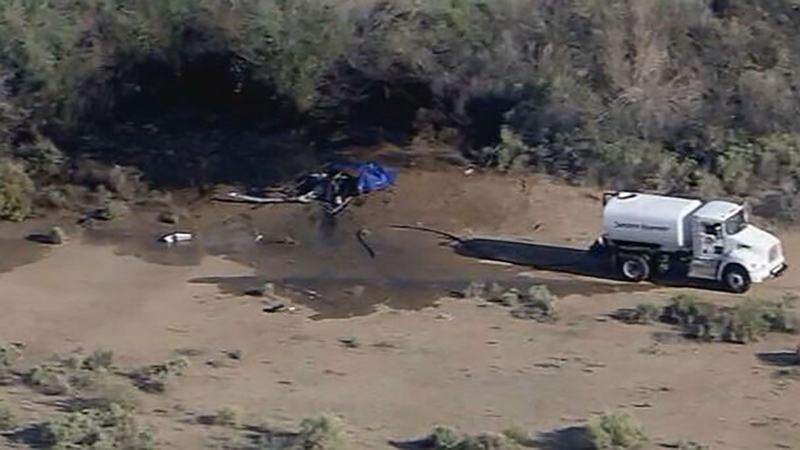 CHANDLER, Ariz. -- A helicopter and a single-engine plane collided in midair Friday near a suburban Phoenix airport, sending the helicopter crashing into a field and killing both people on board. The plane landed safely, and the flight instructor and a student inside were not hurt.

The collision happened in the city of Chandler near its municipal airport, said police Sgt. Jason McClimans. He said no one on the ground was hurt but the airport would remain closed for several hours.

The Chandler Fire Department received reports of a fire in a brush field next to the airport shortly before 8 a.m. Crews found a large plume of smoke and the wreckage of the helicopter on fire but were able to extinguish it relatively quickly, fire officials said.

They inspected the helicopter and found the bodies of the two people on board. The Maricopa County medical examiner's office will determine their identities.

The chopper was operated by Quantum Helicopters and the plane by Flight Operations Academy. Both are flight schools, according to McClimans, of Chandler Police.

Richard Bengoa, owner of Flight Operations Academy, told The Associated Press the four-seat plane is used mostly for flight training. The only people aboard were the flight instructor and the student pilot.

Though officials did not allow Bengoa to get close to the plane, he said it appeared from a distance that its landing gear had been damaged. He said he had no information about how the collision happened and was not allowed to speak with the instructor or student.

Bengoa described his operation as "more of a family business to kind of promote aviation and help people get their licenses."

A statement from the Federal Aviation Administration also indicated evidence of damage on the Piper PA-28 aircraft's landing gear. The agency listed the helicopter as a Robinson R22.

The airport's control tower was operating at the time of the collision. But FAA officials declined to say how many of the staff were there, noting that detail will be part of the overall investigation.

The National Transportation Safety Board will lead the investigation into the cause of the collision and crash.

Police are seeking any witnesses or people who may have filmed the ordeal.

Chandler Municipal Airport does not provide commercial airline service. Most of the flights there are for chartered trips, private excursions and training. It's considered one of the nation's 50 busiest general aviation airports with more than 200,000 flight operations a year, according to Chandler's tourism office.

Dodge City Community College in Kansas operates its DC3 Flight Instructor Program out of the Chandler airport. The school said in a statement on its Facebook page that "officials are working to notify the appropriate families of those involved in the incident." Authorities have not mentioned any ties to a specific training program.