Debris from Minnesota plane crash landed in nearby yards and struck at least one house, igniting a fire
ABCNews 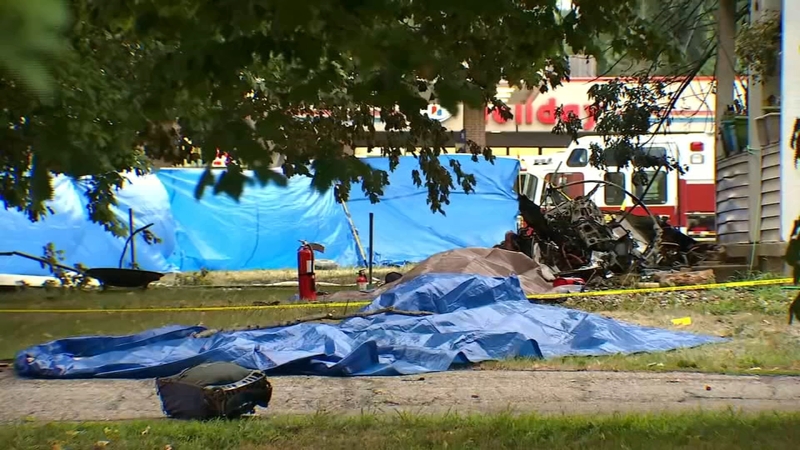 VICTORIA, Minn. -- A relative has identified three people killed in the fiery crash of a small plane in southeastern Minnesota as a surgeon from Omaha, Nebraska, and two of his family members from Wyoming.

Jo Mertes, of Mantador, North Dakota, told the Star Tribune Sunday that her nephew, 42-year-old Jacob Mertes and his 37-year-old wife, Sara Mertes, of Libby, Montana, died along with her nephew's 72-year-old stepfather, Dr. James Edney, who was piloting the plane. There were no survivors, officials said.

The Federal Aviation Administration told ABC News the plane was flying from Alexandria Municipal Airport to Eden Prairie's Flying Cloud Airport before 6 p.m. Saturday when it went down and burst into flames in Victoria, a city of about 7,300 about 25 miles southwest of Minneapolis.

"This is a tragic event that happened near the heart of Victoria and our community will keep the victims of this incident and their loved ones in our thoughts and prayers during this time," city officials said in a statement.

Debris from the Mooney M20M landed in nearby yards and struck at least one house, igniting a fire that bystanders quickly extinguished. No one in the home or on the ground was injured, officials said.

The plane is owned by Edney, an Omaha general surgeon and professor of surgery at University of Nebraska Medical Center. Sara Mertes' Facebook page shows that she was a physician at Cabinet Peaks Medical Center in Libby, while Jacob Mertes worked as a sanitarian and planner for the Lincoln County Health Department in Montana, the newspaper reported.

The Carver County Sheriff's Office said further information on the crash will come from the National Transportation Safety Board, which is leading the investigation.

Levi Pemberton, a cashier at the gas station, said he heard a "pop" and turned around and saw a "huge explosion and a big fire." He ran to the crash site and saw charred metal plane parts, including one large piece that looked like a tail sticking up.

"The fire was big enough to scorch the house," he said.