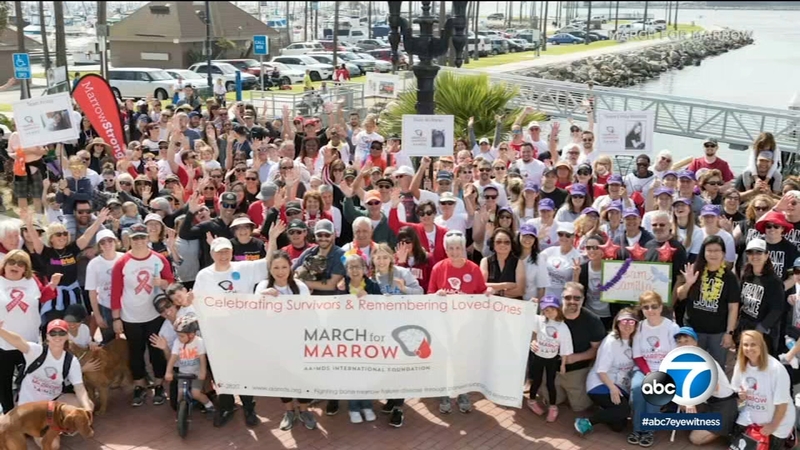 Organizing the 10th Annual March for Marrow at Shoreline Village is time consuming for Camilla Ricci, but she says the Aplastic Anemia and MDS Foundation was there when she needed it.

"They provide so many invaluable resources," Ricci said.

Eighteen years ago, the 55-year-old couldn't walk up a flight of stairs. Ricci was diagnosed with a bone marrow failure disorder called PNH, which stands for paroxysmal nocturnal hemoglobinuria.

The disease can strike anyone. It's a condition so rare, she had a difficult time getting an emergency blood transfusion.

"You go into an emergency room and a lot of doctors at the time didn't understand what the condition was," Ricci said.

Experts say think of your bone marrow as a blood factory. That's where your body makes red and white blood cells and platelets. When you get PNH, your factory shuts down.

"It left me needing monthly blood transfusions. I was completely depleted of energy," Ricci said.

She suffered severe anemia, fatigue and a dangerous blood clot.

"It's not inherited, but there is a very specific mutation associated with the disease," USC's Dr. Ilene Weitz said.

Weitz explained that PNH used to be a death sentence, but now new research is beginning to yield many new treatments including in some cases, bone marrow transplants.

"We are just at the tip of the iceberg with these disorders," Weitz said.

Weitz put Ricci in a clinical trial of a drug that inhibits a red blood cell marker.

"I haven't needed a blood transfusion since I've been in the clinical trial for the past 2 1/2 years," Ricci said.

And Ricci says the Aplastic Anemia and MDS Foundation helped empower her. Through them, she's been able to find the support and care she needs.

Taking part in the March for Marrow Walk helps her and other patients feel like they're not alone.

"It just brings patients so much hope and it really helped me through this greatly," Ricci said.