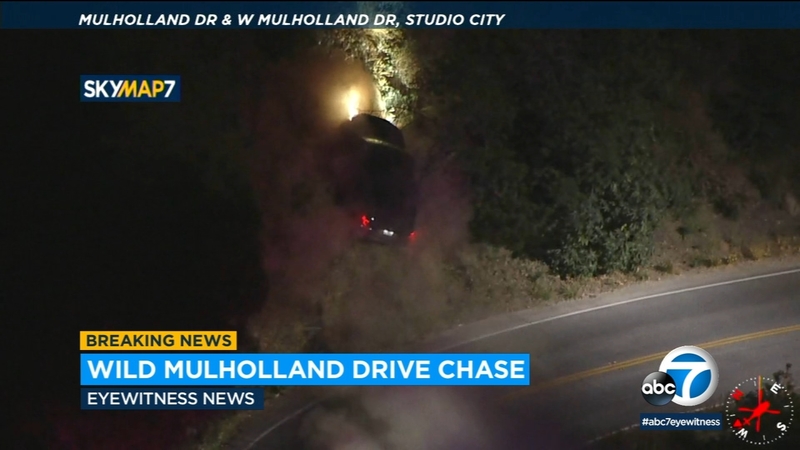 LOS ANGELES (KABC) -- The driver of a reported stolen Honda Passport led police on a wild high-speed chase down Mulholland Drive that ended in a dangerous crash and lengthy standoff in the Hollywood Hills Tuesday night.

Officers with the Los Angeles Police Department began chasing the driver around 9 p.m. in the Van Nuys area.

The driver of the SUV with Texas license plates was speeding down the southbound lanes of the 101 Freeway after winding through the streets of Tarzana.

At one point, the driver began traveling the wrong way. The driver ended up on Mulholland Drive, where he spent several minutes dodging vehicles as he sped through the winding roads.

A chase suspect was arrested after he crashed on Mulholland Drive and began a standoff with police. Police shattered the SUV's windows and pulled the suspect out.

As the driver approached a curve on the road, the suspect lost control and crashed.

A standoff then ensued as Mulholland Drive was shut down.

Multiple police officers responded to the scene. After about an hour, police approached the vehicle and began to shatter the side windows and pulled the suspect out of the SUV around 11:20 p.m.

The suspect was able to stand up on his own and was taken into custody. His condition is unknown.