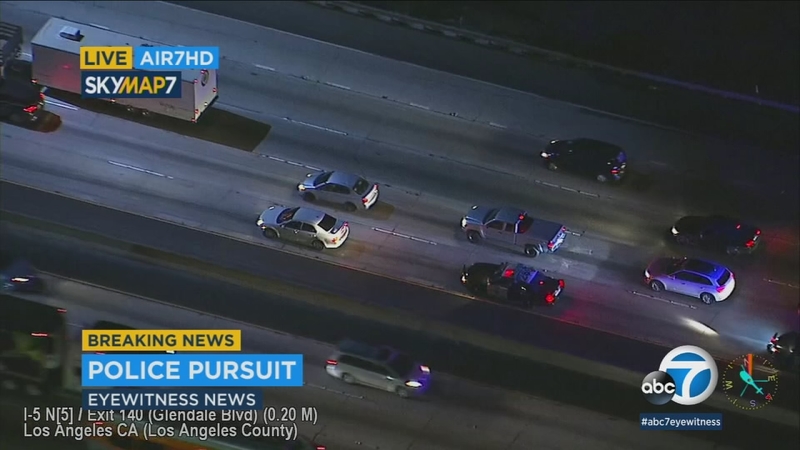 The suspect, traveling at speeds of up to 80 mph in what appeared to be a white Ford Fusion, started evading from police in the Buena Park area.

The female suspect went through the cities of Stanton, Fullerton and Anaheim before getting into the Los Angeles County area on the northbound 5 Freeway.

The driver hit a vehicle at slow speeds in Anaheim. No injuries were reported in the collision, police said.

In La Mirada, patrol vehicles appeared to lose sight of the sedan.

The California Highway Patrol took over the chase in Commerce, where the suspect went onto surface streets at slow speeds.

At one point, the woman appeared to flash a flashlight out of the driver's side window.

The driver got back onto the northbound 5 Freeway, pushing 90 mph, with CHP patrol vehicles close behind.

The woman appeared to slow down in the Echo Park area, moving along with traffic on the freeway.

In the Glendale area, CHP officials canceled the chased shortly before 8 p.m., and patrol vehicles were seen backing off the vehicle.

Authorities said they went to a residence to investigate the violation, saw the car associated with the call and tried to stop the woman but the pursuit ensued.