Pedestrian, 57, critical after being struck by suspect fleeing police in South LA 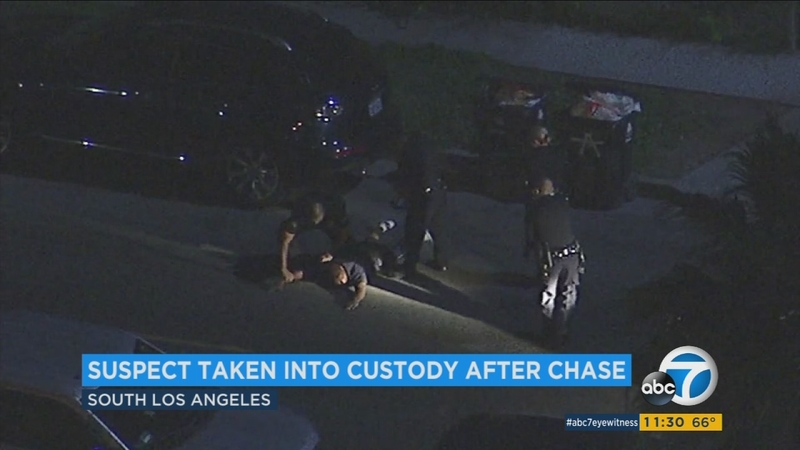 The suspect kept going after the crash, fleeing on foot. AIR7HD video showed police tracking him down and surrounding him as he tried to hide under a car. He was arrested at the scene, not far from the crash at 87th Place and Broadway.

The pedestrian, a married man and active church member, was part of a procession leaving the Mother of Sorrows Church. At the time of the collision, he was "in the street, attempting to make things safer" by directing traffic, an LAPD spokesman said.

"He put a vest on, he was trying to get pedestrians moving this way and that way and cars moving through," Lt. David Ferry of the Los Angeles Police Department.

The suspect's vehicle then came flying down the road and people started jumping out of the way.


One witness said if the street hadn't been partially blocked off for the church service, many more people could have been injured.

"We hear a skid and we hear a police cruiser and we see this guy getting chased with the lights off," said church member Carlos Ramos. "So he hits one of the security cars that we use to block the people, and he swerves and he hits one of our friends from church."

They called 911 and tried to give their friend first aid until help arrived, Ramos said. He was breathing when paramedics arrived but badly injured. His family was with him in the hospital.

"This was a very, very avoidable, tragic event that shouldn't have happened," Ferry, the LAPD lieutenant, said.

Police said they were taking a close look at the actions of officers during the pursuit as well.

"Our officers always use a balance test. They always look at what is the seriousness of the crime, what is the threat of this person in the community...," Ferry added.