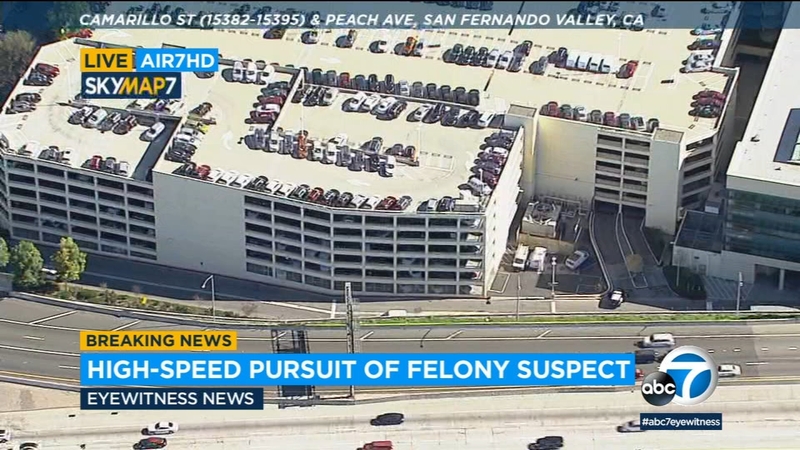 AIR7 HD was over the chase, which began in Burbank just before 10 a.m.

The driver traveled at a high rate of speed on surface streets in Granada Hills, Northridge and Reseda, where he was seen weaving between vehicles and driving through red lights.

The suspect, who was driving a dark-colored Mercedes Benz, turned onto the 101 Freeway eastbound, where he darted across all lanes as speeds reached over 80 mph.

At multiple points during the pursuit, responding Los Angeles police and California Highway Patrol officers went into tracking mode as the chase exceeded speeds of 100 mph on the 5 and 101 freeways.

As traffic became congested on the 101 Freeway in Sherman Oaks, the driver exited and continued onto surface streets, where he nearly struck a pedestrian on Moorpark Street.

The suspect appeared to be using a cellphone during the chase.

The chase ended at the Sherman Oaks Galleria, where authorities believe the driver bailed on foot.

A perimeter was established at the mall, which was shut down as officers searched for the suspect. People were urged to avoid the area during the investigation.
Report a correction or typo
Related topics:
san fernando valleylos angeles countylos angelespolice chase
Copyright © 2021 KABC-TV. All Rights Reserved.
More Videos
From CNN Newsource affiliates
TOP STORIES