A high-speed chase through the San Fernando Valley came to a wild end Wednesday as the suspects smashed into several parked cars at high speeds.
KABC
By ABC7.com staff 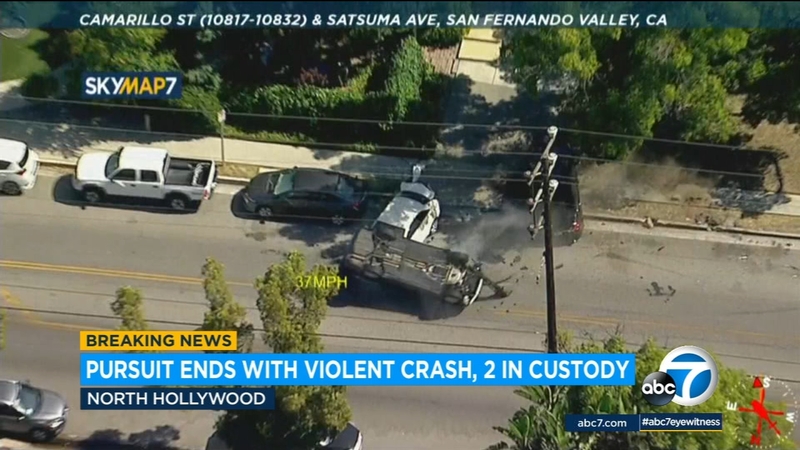 High-speed chase through the Valley ends in violent crash

BURBANK, Calif. (KABC) -- A high-speed chase through the San Fernando Valley came to a wild end Wednesday as the suspects smashed into several parked cars at high speeds.

The crash left the man and woman uninjured even as the black BMW flipped over. The two took off running. Within minutes police had found them and they flattened themselves on the ground to surrender.

The chase started near the Newhall Pass around 3:30 p.m. It was not immediately clear why the driver was initially wanted.

The female driver in a black BMW with a male passenger fled on the southbound 5 Freeway into the San Fernando Valley at speeds exceeding 100 mph and then exited onto surface streets in Burbank.

A high-speed chase through the San Fernando Valley came to a wild end Wednesday as the suspects smashed into several parked cars at high speeds.

At that point, it appeared officers had pulled back into tracking mode. The suspect began driving slowly and obeying traffic rules, driving over surface streets in Burbank.

At one point the car pulled over in a Burbank neighborhood and the male passenger and female driver switched places.

Two suspects led deputies on a wild chase Thursday night through Palmdale and into Sylmar with their vehicle's hood blocking the windshield and two tires blown out by spike strips.

They continued driving through the Burbank, North Hollywood and Toluca Lake area. At one point, the male driver drove in reverse at a high speed on a narrow residential street in order to make a U-turn.

Later he was driving down Camarillo Street and drifted to the right, smashing directly into two cars parked on the right side of the street. The suspect's vehicle flipped over.

The two suspects quickly exited and fled, at one point holding hands as they ran just before they were arrested.

Paramedics were at the scene evaluating the suspects because of the crash.

A chase of a stolen Land Rover ended when the suspect crashed and flipped the vehicle on its side, trapping him inside near South Los Angeles Tuesday night.