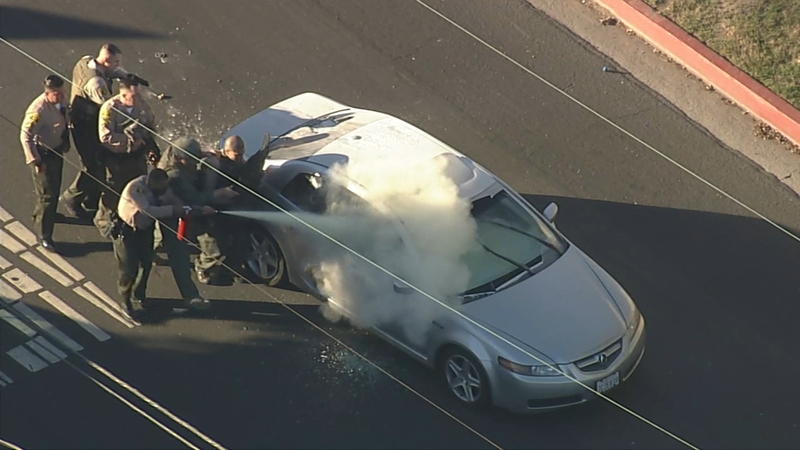 PARAMOUNT, Calif. (KABC) -- An arson suspect was involved in a dramatic standoff with sheriff's deputies on Thursday morning after a high-speed chase ended on a residential street in Paramount, authorities said.

The pursuit began shortly before 8 a.m. in Compton and later came to a stop on San Jose Avenue and Somerset Boulevard, where several patrol vehicles positioned themselves behind the suspect's car.

The man was suspected of possibly attempting to set his home on fire after receiving an eviction notice, a spokesperson for the Los Angeles County Sheriff's Department said.

Smoke was seen emanating from the vehicle after deputies apparently fired less-than-lethal rounds. At least one of the car's windows was shattered, scattering glass onto the street.

A chase involving multiple suspects ended with a PIT maneuver near Norwalk on Tuesday after authorities pursued the vehicle on Southern California freeways.

About 30 minutes into the standoff, a small flame was visible inside the vehicle. Deputies approached the passenger side and deployed a fire extinguisher, spraying a large cloud of retardant, then retreated.

The suspect, who was also wanted on suspicion of brandishing a weapon, remained inside the car but moved to the back seat.

Authorities later summoned to the scene three armored vehicles, which surrounded the driver's four-door sedan as the stalemate continued.

Several homes had to be evacuated.