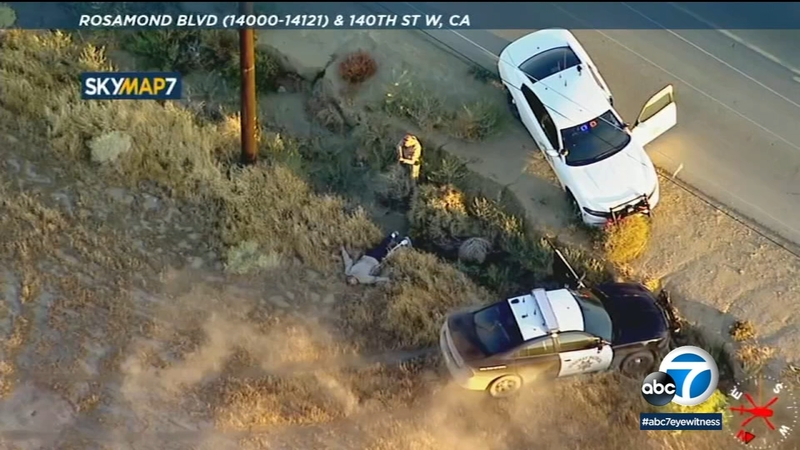 TEHACHAPI, Calif. (KABC) -- A suspect was arrested after stealing a CHP cruiser and leading officers on a wild pursuit over rough desert roads through the Antelope Valley and Kern County Wednesday.

The chase began earlier Wednesday afternoon as officers were pursuing an assault suspect in a Kia sedan in the Lancaster area. He was wanted for assault on a sheriff's deputy.

They lost the vehicle and called off the pursuit, but the vehicle apparently broke down and a carjacking of a pickup truck was reported in the same area a few minutes later.

Officers chased after the carjacked pickup truck through the Antelope Valley area up north on State Route 14 into the desert communities and then into Rosamond and Kern County.

After a lengthy chase at speeds reaching 100 mph, eventually the pickup veered off the road and wiped out in the dirt.

Two suspects - male and female - emerged from the car, embraced briefly and then ran away on foot in separate directions.

The male suspect was later identified as Juan Jose Galvez, 29.

Eventually the male suspect circled around on foot and was able to get into a CHP cruiser that had been left on the road as officers were pursuing him on foot.

A suspect stole a CHP cruiser in a wild pursuit over rough desert roads through the Antelope Valley and Kern County Wednesday.

He started up the cruiser and took off again on rough roads through the desert.

He fled about a half-dozen police units for about 10 to 15 minutes, going off-road into rough terrain and then finally getting stuck as he tried to bring the cruiser back onto a paved highway.

At that point, the cruiser wouldn't move and he surrendered without further incident.