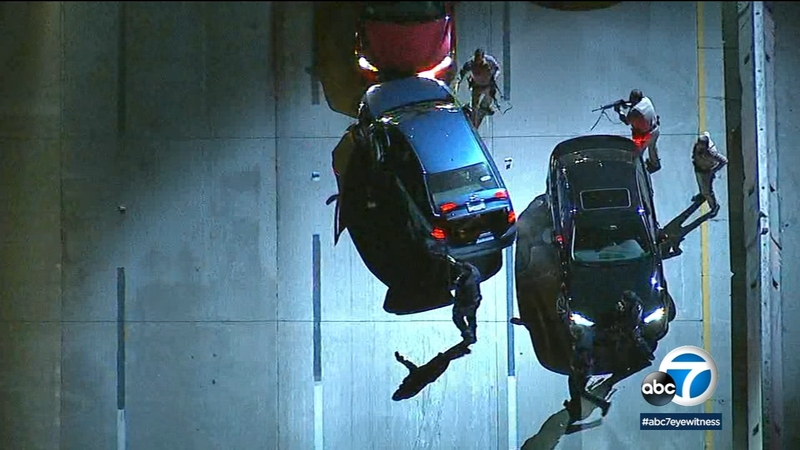 BURBANK, Calif. (KABC) -- A wild and dramatic chase turned into a tense and dangerous standoff in the middle of the 5 Freeway in Burbank Friday night.

A suspect led police on the reckless chase initially through the Sunland-Tujunga area and in parts of the San Fernando Valley, swerving on roads and attempting to hit several cars, including patrol vehicles.

At one point, the suspect slammed into patrol SUVs behind and in front of him after stopping in the middle of the road in the Sun Valley area.

Vehicles were hit by the suspect in head-on collisions as the driver would drive off, travel on the wrong side of roads and run through gas stations. In one incident, the driver hit a pickup truck and drove onto the sidewalk.
EMBED More News Videos

A wild and dramatic chase turned into a tense and dangerous standoff in the middle of the 5 Freeway in Burbank Friday night.

The driver also sharply swerved several times while on open roads. While on Glenoaks Boulevard, he briefly stopped and appeared to brandish a knife out of the driver's side window.

After recklessly driving on surface streets, the suspect began traveling on the wrong direction on the northbound lanes of the 5 Freeway in the Sun Valley area as police attempted to stop the suspect.

At one point during the heavy congestion, another driver got out of his vehicle and appeared to have a gun.
EMBED More News Videos

A chase suspect travels on the wrong side of the road as he gets on the 5 Freeway in the Burbank area on Friday.

While on the freeway, the driver attempted to split two vehicles and came to a stop after hitting the cars. Officers approached the suspect vehicle with guns drawn. California Highway Patrol officers shot at the suspect before the collision. It's unclear whether the suspect was struck by gunfire but appeared to be bleeding. Blood was also spotted running down the driver's side door.

A man believed to be armed with a gun appears to approach a chase suspect traveling the wrong way on the 5 Freeway in Burbank.

Surrounding drivers were evacuated from their cars as the suspect remained cornered in the car.

The standoff continued on for several minutes. At one point, the suspect stepped out of the car and casually tried to walk away from the vehicle before apparently getting hurt, possibly by a Taser that was deployed, and ran back behind his vehicle.

The suspect was then seen lying down next to the car with a knife in his hand. He abruptly jumped up, climbed over the hood of the car and tripped before several officers moved in and handcuffed the suspect.