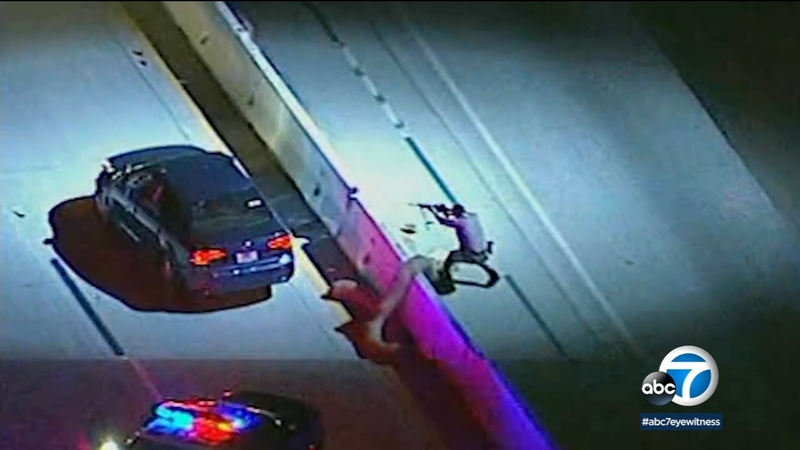 Could authorities have done more to stop Burbank chase?

BURBANK, Calif. (KABC) -- A terrifying chase that ended in a bizarre standoff on the 5 Freeway in Burbank Friday night put many lives at risk, which had some people wondering whether there was anything more law enforcement could have done.

"In this case, this guy did some horrific maneuvers: wrong way down the freeway, he ran into various cars, he pinned himself in, he backed into the police," said law enforcement expert Bruce Thomas. "So this pursuit took on a whole new level of a guy trying to get a away."

The wild pursuit came to a crashing end as the suspect, now identified as Drew Smith, went the wrong way on the 5 Freeway and slammed into oncoming traffic. The drama began when police tried to pull over Smith for driving erratically. The 29-year-old crashed into cars, rammed police cruisers and at one point leaned out the window, threatening officers with a knife.

A wild and dramatic chase turned into a tense and dangerous standoff in the middle of the 5 Freeway in Burbank Friday night.

When the suspect pulled onto the I-5, driving southbound in the northbound lanes, the chase took a terrifying turn. An officer opened fire on Smith, trying to end the danger, but the suspect kept going until he ended up boxed in by traffic. That's when the bizarre standoff began.

Smith got out of the vehicle and jumped around as officers fired non-lethal rounds, before finally taking him into custody.

The violence shut down both directions of the freeway for hours. The northbound side remained closed until Saturday morning as the investigation continued into the officer-involved shooting.

Many questioned if police could have ended the pursuit sooner. Thomas said there are so many decisions that go into trying to stop a fleeing suspect.

"The hardest thing in pursuits is trying to manage them. If you're able to do a PIT maneuver, when can you do it? There are various factors: the speed, the traffic conditions, how much traffic is out there, the length of the street, the width of the street," he explained.

Experts say technology is helping end pursuits sooner but say don't expect them to ever be eliminated.

"You can't let a fleeing felon, especially one who's assaultive and high risk get away, you just can't do that," Thomas added.

During Leanne Suter's live report on this story, another chase occurred right behind her. Los Angeles police were chasing a stolen vehicle that was going southbound on the 5 and exited Buena Vista Avenue and continued on San Fernando Road. The chase ended when the driver crashed into a pickup truck at Claybeck Avenue and Coldwell Drive. The suspect was taken into custody.

Well that was a first! You can hear the tires squeal & see the smoke as an #lapd #pursuit races by during my #liveshot on last nights pursuit. #onlyinLA pic.twitter.com/UVtwlUc5OB

This is how the pursuit ended that passed by us as we were #live at 6pm talking about last nights pursuit.
Suspect slammed into a parked truck. He’s in custody, taken to hospital to be checked out. pic.twitter.com/xwktPl2pig