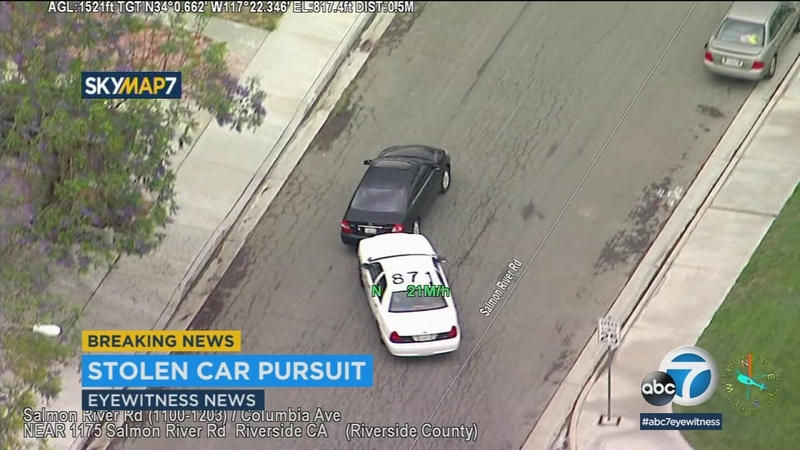 An innocent couple with a baby also got swept up in the chase, giving a ride to a female passenger who had been in the suspect's vehicle without realizing she was wanted by police.

That couple ended up getting pulled over at gunpoint and taken into custody until police were able to establish they were not involved with the suspects.

The incident started just before noon in Anaheim, when a K-9 handler spotted a black Toyota Camry with tinted windows near Harbor Boulevard and the 91 Freeway shortly before noon. That K-9 handler ran the license plate, which came back as stolen or lost.

The officer attempted to make a traffic stop, but the suspect sped off, fleeing along surface streets before getting on the 91 Freeway.

Anaheim police said the suspect was initially traveling approximately 100 mph but later slowed down to traffic speed, around 60 mph. Anaheim police then relinquished control of the pursuit to the California Highway Patrol.

A suspect in a reportedly stolen vehicle fled from law enforcement in Orange County and the Inland Empire on Monday.

The suspect fled on the 91 Freeway, through Anaheim Hills and into Riverside, then drove onto the northbound 215 Freeway, where he was seen throwing unknown items out of the car window. There was a woman with him in the passenger seat.

He then drove onto the southbound 15 Freeway, reaching speeds as high as 125 mph as the chase made its way to Rancho Cucamonga.

The suspect eventually got off the freeway and drove onto surface streets in Riverside. As the suspect drove through residential areas, a pursuing officer attempted two PIT maneuvers, which were both unsuccessful. The suspect's vehicle wobbled but managed to evade capture.

A chase suspect in a reportedly stolen car managed to escape police capture after two unsuccessful PIT maneuvers in Riverside.

The suspect then drove onto Etiwanda Avenue, traveling on the wrong side of the road. He drove on the shoulder of the road within an arm's reach from traffic traveling in the opposite direction.

A chase suspect drove on the wrong side of the road in Riverside during a pursuit on Monday while evading police in a reportedly stolen vehicle.

Eventually he pulled over in the Glen Avon/Jurupa Valley area. He fled on foot into a cluster of commercial buildings, but was soon taken into custody by pursuing officers.

His female passenger also got out and she hopped into the backseat of another car that happened to be driving by.

The couple driving the car - with a baby also in the backseat - gave her a ride for a short distance, until a videographer who was filming the chase pulled up alongside them.

Thinking he was involved in the chase, the videographer tried to convince the driver to surrender.

"Hey give up, dude," the cameraman can be heard saying in the video.

"She asked us for a ride. I don't know who she is," the driver replied.

"Hey, give up, lay on the ground right here," the videographer said.

The woman then got out of the couple's car and surrendered, laying on the ground.

The couple continued driving until officers chased them down and pulled them over, ordering them out of the car at gunpoint. Officers were then seen removing the carseat and infant from the back seat.

Anaheim police later said they were able to confirm that the couple driving the second car were not involved with the suspects and had just given the woman a ride when she hopped into their car.

A female passenger exited the chase suspect's vehicle and was taken into custody by police.

The male suspect who was driving the car in the chase was loaded into an ambulance and police said he may have been on a controlled substance.