KABC
ATWATER VILLAGE, LOS ANGELES (KABC) -- A woman was taken into custody after being suspected of leading authorities on a chase that ended in an apartment complex in Atwater Village.

The woman claimed she was merely sleeping in a car that matched the description of the vehicle police were after.

Authorities chased a reckless driving suspect from Santa Clarita into Los Angeles, where the suspect tried to hide in an apartment complex's garage Tuesday night.

Footage from the scene showed multiple officers taking the woman into custody around 1 a.m. Wednesday as she yelled, "I'm sleeping, Mom! Mom!"

It all started around 11 p.m. Tuesday when officers spotted an SUV driving erratically and tried to pull the car over.

The driver failed to yield. The dark colored Kia eventually made it into the Burbank area before getting onto the southbound 5 Freeway.

After a short time, the suspect exited the freeway and got onto Riverside Drive near Hyperion Avenue. The suspect followed a vehicle into a gated apartment complex. A few seconds later, the gate closed behind the suspect's vehicle. Authorities eventually surrounded the gate in search of the suspect.
Report a correction or typo
Related topics:
santa claritasan fernando valleyburbanklos angeles countylos angelesatwater villagepolice chasechpapartmenthigh speed chase
Copyright © 2020 KABC-TV. All Rights Reserved.
RELATED 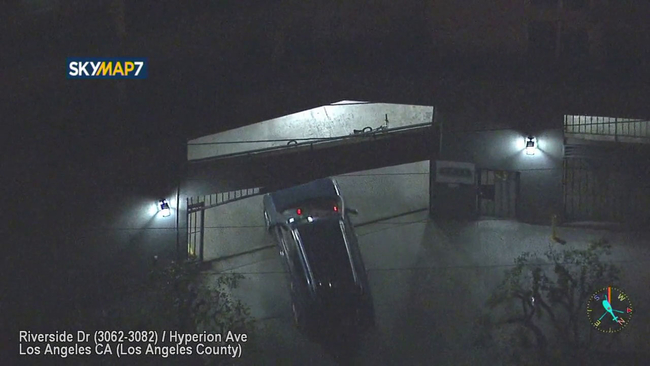