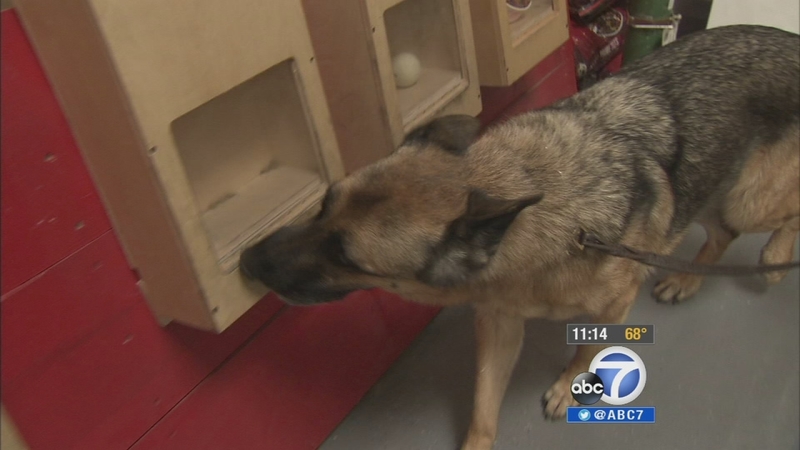 BREA, Calif. (KABC) -- Falco K-9 Academy has trained dogs for police departments across the U.S. Recently, however, the company has gone international.

Owner Andy Falco Jimenez has been contracted by the Kingdom of Bahrain to train 20 bomb detection dogs. He will then fly them to the Middle East and train their handlers.

Eventually, his company will train all of the country's police and military dogs, Jimenez said.

Jimenez admitted he didn't know much about the oil-rich, Middle Eastern country before being contacted by Bahrain's government. He said they'd heard about his technique.

"We use a system of love and respect, which is completely different than a lot of organizations," Jimenez said.

The work will present some unique challenges.

For one, the country is often sweltering hot. To prepare dogs to work in 115 degree temperatures, the dogs are expected to train in the Coachella Valley.

Then, there are the cultural differences.

"In dealing with a Middle Eastern country, sometimes they don't care for dogs," Jimenez said.

That's why Jimenez said he will have to find dogs that are so social, they can get along with people who may even be afraid of dogs.

Jimenez said it will take him at least a month to search the world for the right dogs to train.

In addition to social dogs, Jimenez said they must be obsessed with finding their toy.

"We want a dog that when you throw that ball, no matter where it is, he will hunt until he can't hunt any longer," Jimenez said.

Falco K-9 uses a tennis ball as the key to a great deal of training.

"We tell the dog, 'Here's the odor you want to find,'" Jimenez said. "In the beginning, we put that toy with the owner. Eventually we take the toy out and the dog will smell the odor that we're training a dog to find. Once the dog goes, 'Hey, there's that odor, but where is my tennis ball?' we throw the tennis ball from a secondary place."

When near dangerous explosives, the dog will have to come back to the trainer to retrieve the ball.

"There is not that big of a difference between training police dogs and training Mrs. Jones' toy poodle," he said.

Jimenez said mutual respect based on boundaries is important.