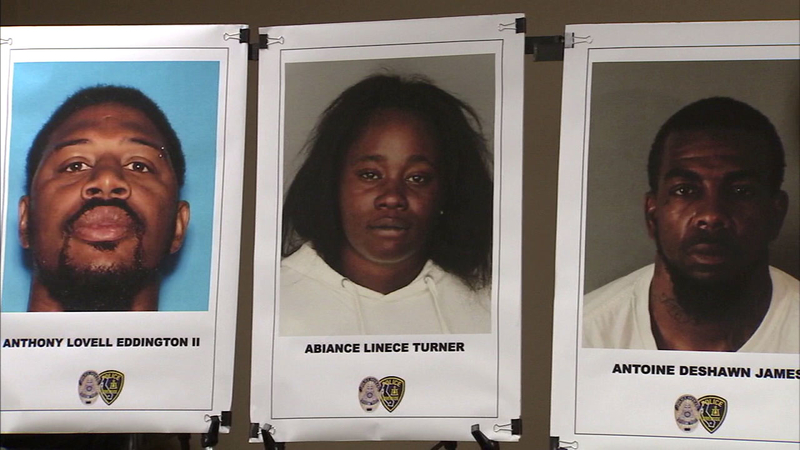 RIVERSIDE, Calif. (KABC) -- A man who was shot and killed by Fresno County sheriff's deputies has been identified as one of the suspects in the killing of two men in Riverside County last year.

Two other suspects also allegedly involved with the killing have been arrested, officials said.

Anthony Lovell Eddington II, 24, was shot and killed in Coalinga on Wednesday as deputies went to arrest him outside a home.

Eddington was believed to be one of three suspects in the Oct. 23, 2015 shooting of three people, two fatally in Riverside.

Anthony Lovell Eddington, 24, is shown in an undated DMV photo.

Police say Antoine James, 39, shot a man in the face that night. The victim survived.

But two gardeners working for a landscaping company nearby happened to witness the shooting. That's when, police say, Eddington shot and killed both of them. The two victims were identified as Juan Bartolo, 45, and Domingo Esteban, 26, both Guatemalan nationals.

"Those victims we believe would actually have been alive had they not been at that location," said Lt. Frank Assumma with the Riverside police. "These suspects were looking that night to go out to shoot people."

James was arrested Wednesday in Bakersfield.

But when deputies tried to arrest Eddington outside a home in Coalinga, they say he started shooting at them with a gun in each hand.

"He was a good guy," said the suspect's brother, Acquarey Eddington. "I promise you. They're trying to make him seem like some dangerous criminal and he wasn't."