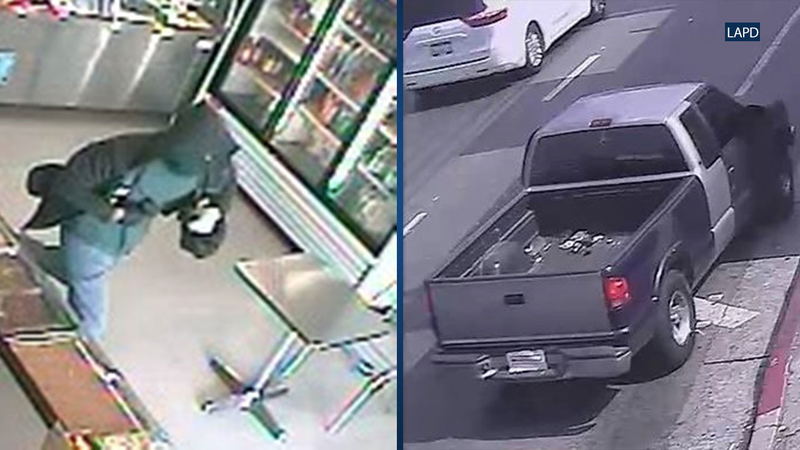 LOS ANGELES (KABC) -- The Los Angeles Police Department is seeking the public's help in identifying an armed robbery suspect and the driver of his getaway vehicle, which was captured on surveillance video.

The robbery suspect reportedly held up a bakery at gunpoint in the 1300 block of South Vermont Avenue on June 28. After taking money from the register, he entered a waiting vehicle that was driven by a second suspect.

Both suspects fled northbound on Vermont Avenue and then eastbound on Pico Boulevard.

The first suspect is described as a male Hispanic standing 5 feet 9 inches to 6 feet 2 inches tall with a thin build. He was wearing a ski mask, black jacket, green shirt, blue jeans and dark shoes, according to police.

The LAPD has not been able to provide a description for the driver of the getaway vehicle, which appeared to be a late 90s or early 2000s pickup truck.

Grey-blue in color, the 2-door pickup truck with tinted windows and white paper plates was possibly a Chevy S10 or Toyota Tacoma. It featured an "Air Jordan" sticker located on the rear windshield below the brake light.