Biden stands by Newsom ahead of recall election, warns country's future is on ballot 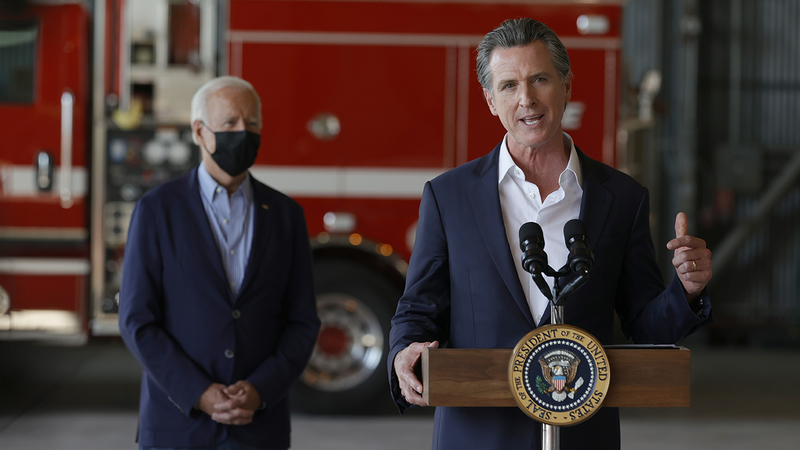 Californians may be the only ones that can vote in Tuesday's recall election, but in his closing arguments for Gov. Gavin Newsom, President Joe Biden warned that the country's political future is on the ballot.

"This is not hyperbole. The eyes of the nation are on California because the decision you're about to make isn't just going to have a huge impact on California, it's going to reverberate around the nation, and quite frankly, not a joke, around the world," Biden stressed.

Biden rallied alongside Newsom Monday, first traveling to survey the fire damage from the Caldor Fire, then to Long Beach, California, to make one final pitch to voters.

His support for Newsom comes after a slew of top Democrats, including Vice President Kamala Harris and Massachusetts Sen. Elizabeth Warren, traveled to the Golden State to campaign for the embattled governor.

On the eve of his recall election, Newsom main argument was one focused on Trumpism.

"We may have defeated Donald Trump, but we have not defeated Trumpism," he said. "Trumpism is still on the ballot in California and that's why it's so important, not just for all of us here at 40 million Americans strong in the nation's largest and most populous state, but also to send a statement, all across the United States of America, that Trumpism isn't ... has no place here."

It was a theme that Biden picked up, calling Republican front-runner Larry Elder a "clone of Donald Trump."

"This is the closest thing to a Trump clone that I've ever seen in your state. Now I really mean it. And he's leading the other team. He's a clone of Donald Trump ... you can't let that happen. There's too much at stake," he said.

"You either keep Gavin Newsom as your governor, or you'll get Donald Trump," Biden continued.

While both speeches largely focused on making comparisons between Elder and the former president, Biden did praise Newsom on many of his policies, such as Newsom's handling of the pandemic -- which is one of the main reasons the recall effort took off.

"We don't need politics in this battle against COVID. We need science. We need courage. We need leadership. We need Gavin Newsom. The governor will follow science. He's got the courage to do it right now," Biden said.

In another effort to nationalize the recall, Biden pointed to other states to warn voters of what could happen should Newsom be replaced.

"Do you have any doubt about how important it is to have Gavin, who respects women's rights? Just take a look at what's happening to states like Texas," Biden said. "It just passed a law empowering complete strangers ... become bounty hunters, going after women who exercise their right to choose. A law the United States Supreme Court refused to stop. Now other states say they're looking to replicate the Texas law. You don't think women's rights are under assault? You're not looking."

In Tuesday's election, voters will be asked two questions: Should Newsom be recalled? And if so, who should replace him?

At least 50% of voters will have to vote no on Tuesday's recall in order for Newsom to keep his job.

As election day gets closer, Newsom's job security is looking better, as 57.3% of voters say they'll vote no, according to FiveThirtyEight's polling average.

While Newsom's team has expressed confidence in his ability to make it though Tuesday's recall, his ally, Biden, wrapped up his remarks Monday night with a stark warning: it's not over yet.

"You have a governor to make sure Donald Trump's dark, destructive divisive politics never finds a place in California. So please -- not a joke -- on behalf of the people of Delaware, Pennsylvania, Minnesota, all across America, don't take anything for granted," the president said.

Although Californians will make their voices heard at the ballot box, candidates on both sides are warning of potential legal challenges that could follow.

Elder, who would not say if he would accept the results of Tuesday's election in an interview with ABC News' Zohreen Shah, has already started making claims of fraud.

On his campaign website, Elder has linked to a "Stop CA Fraud" page where voters can report fraud. While no votes have been calculated yet, the page already claims: "Statistical analyses used to detect in elections held in 3rd world nations...have detected fraud in California resulting in Governor Gavin Newsom being reinstated as governor."

"There will inevitably be claims that the election is rigged because the purveyors of the 'big lie' need these local and state elections in between the major national elections to keep up their momentum; but all of their allegations in the November 2020 election fell flat," Stein said. "There's nothing new under the sun here. And we assume that there will be lawsuits filed after the recall and they will be treated the same way as the lawsuits in the 2020 election."

Stein said misinformation in the recall could also undermine and limit turnout among the voters that those who are sowing the misinformation are trying to reach.

But such misinformation, he said, has "no basis in the realities of California's election administration, which has been stress-tested repeatedly and proven to be some of the most secure, most reliable elections in the nation."

That reliability will be put to the test Tuesday in an election with profound national consequences.