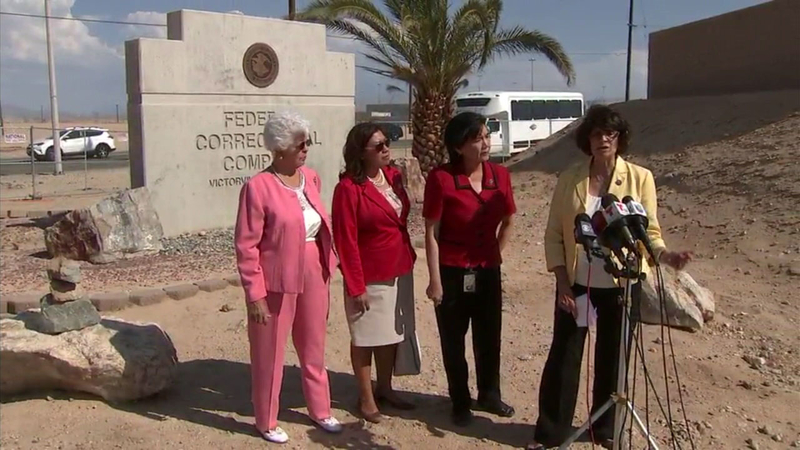 VICTORVILLE, Calif. (KABC) -- California members of Congress toured two Inland Empire detention centers for immigrants and deplored the conditions, saying they had inadequate staffing and a lack of medical care for detainees.

Victorville is a federal medium-security prison which has a contract with Immigration and Customs Enforcement to house 1,000 immigrant detainees. Adelanto is the largest detention center in California.

The representatives said as a prison, Victorville appeared unequipped to handle detainees. Staffers were trained to deal with violent criminals but not detainees, they said.

"We're not talking about criminals. We're talking about men and women who were escaping violence and horrible conditions in their home country," said Rep. Lucille Roybal-Allard, D-Los Angeles.

When the detainees first arrived, most were not allowed to leave their cell, change their clothes or shower for the first 15 days, they said. They have also been denied access to adequate medical care.

They also said that more than half of the detainees they saw in the tour were of Indian or Sikh backgrounds.

Many of them tried to enter the United States through Mexico after fleeing persecution in their home countries.

In one case, a couple fled India because their fellow villagers didn't approve of their relationship and were threatening to commit an "honor killing," according to Rep. Mark Takano, D-Riverside.

"These are not criminals coming here," Takano said. "These are people with real stories, real tragic stories."

When they arrive in the detention centers, Sikhs are denied religious accommodations for their diet and headdress, he said.

He said the high numbers of Sikh and Indian detainees dispels the idea by President Donald Trump that most undocumented immigrants are members of Central American gangs.

"Obviously they are not members of MS-13," he said.