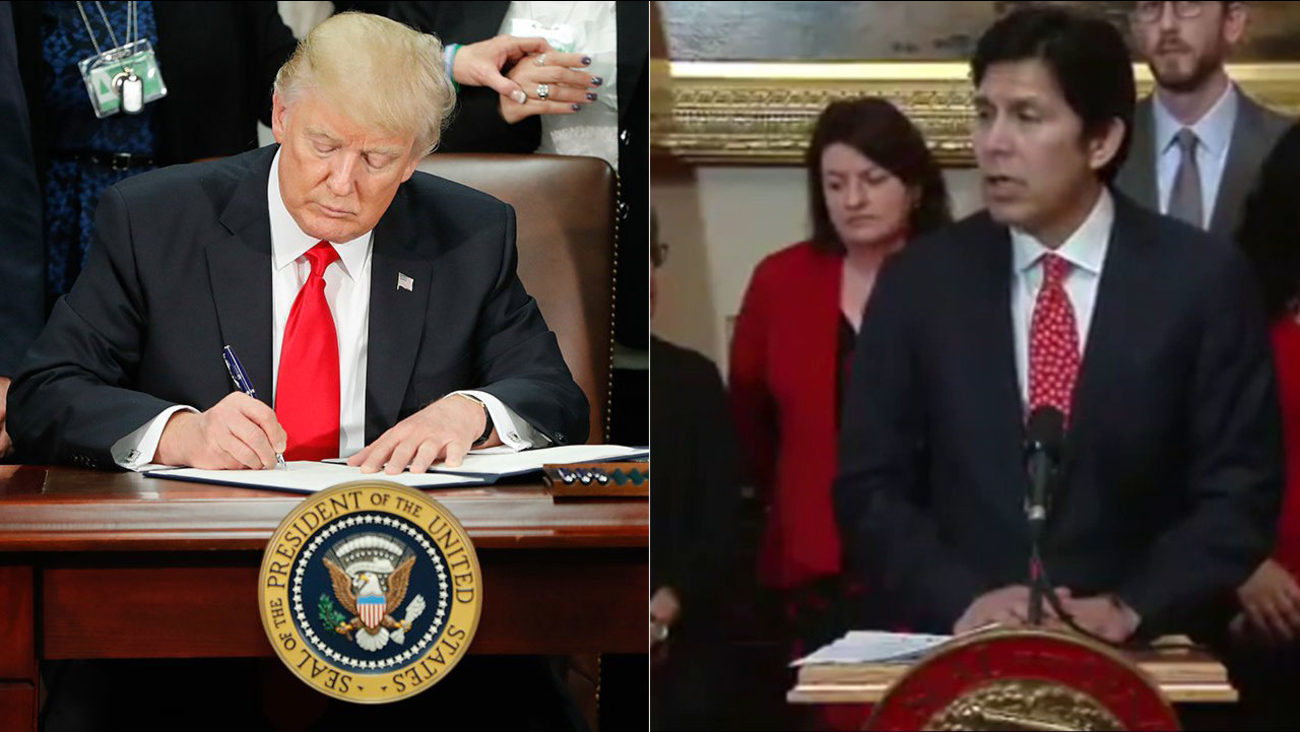 "If the new president wants to wage a campaign of fear against innocent families, he can count us out," said state Senate President pro tempore Kevin de Leon, D-Los Angeles. "We will not spend a single cent nor lift a finger to aid his efforts."

The first bill, Senate Bill 54, states that local law enforcement and other agencies shall not act as immigration enforcement agents.

Some elements of the bill are similar to policies long held by the Los Angeles police and sheriff's departments to not have officers and deputies act as immigration enforcement agents. The policy by those two agencies is intended in part to prevent witnesses to crimes from being scared of coming forward to law enforcement.

The second bill, SB 6, would create a state program that would pay for legal representation for people facing deportation.

"Nobody should live in a community in constant fear of their government," said Sen. Ben Hueso, D-San Diego, the author of SB 6.

The plans put California in direct conflict with the new Republican administration.

Trump on Wednesday announced a range of tough new immigration-enforcement policies, including starting to build a wall along the U.S.-Mexico border and strip funding from so-called "sanctuary cities" which don't arrest or detain undocumented immigrants.

In a speech at the Department of Homeland Security, Trump said his executive actions show that "beginning today," the U.S. will get back "control of its border."

"We're going to save lives on both sides of the border," Trump said.

De Leon also expressed concerns about Trump's plan to build a new wall on the border, calling it a "physical monstrosity" that will limit the movement of goods, culture, people and food. He also said it won't ultimately accomplish its stated goal.

"If they actually are successful in building a wall, you're probably going to have a new generation of Olympic pole vaulters come about," de Leon said. "And they'll probably be quite successful."

He said the LAPD's Special Order 40, preventing officers from questioning people about their immigration status, is for the benefit of public safety.

But he also noted that the city does comply with federal immigration authorities in regard to cases that involve serious crimes or constitutional detainer requests.

"What we don't do is ask local police officers to enforce federal immigration laws, and that's an official LAPD policy that has been enforced for nearly 40 years," Garcetti said. "That is for everyone's good, because trust between police and the people they serve is absolutely essential to effective law enforcement."

"Everyone in L.A. should feel safe stepping forward if they have witnessed a crime or been victimized themselves - and immigration status shouldn't interfere with the cooperation and partnership we need to keep our neighborhoods safe," he said.