KABC
WASHINGTON -- As the House of Representatives officially voted to impeach President Donald Trump, America is reminded of a very similar and simultaneously very different showdown in Washington: the impeachment of President Bill Clinton.

The Republican-controlled House voted in October 1998 to begin impeachment proceedings against Clinton after months of controversy over his relationship with White House intern Monica Lewinsky.

Clinton was impeached on Dec. 19, 1998, on the grounds of perjury to a grand jury and obstruction of justice.

Clinton was impeached on Dec. 19, 1998, on the grounds of perjury to a grand jury and obstruction of justice. A Senate trial against Clinton commenced on Jan. 7, 1999, and unfolded over four weeks, with Chief Justice William Rehnquist presiding.

On Feb. 12, the Senate voted to acquit Clinton on both charges -- falling far short of the 67 votes needed to convict. Only 45 senators voted for conviction on the perjury charge, and 50 for the obstruction charge.

Trump is only the fourth president to face impeachment: Andrew Johnson, like Clinton, was acquitted after trials in the Senate, and Richard Nixon resigned to avoid being impeached in the Watergate scandal.

RELATED: Donald Trump was impeached. What next?

There are consistencies in the process -- televised hearings, partisan rancor and memorable speeches -- but each impeachment process also stands alone as a reflection of the president, the Congress and the times.

Only 21 government officers in all, including Johnson, Clinton and Trump, have been impeached, and only eight of them, all federal judges with lifetime tenure, have been convicted and removed from office.

Biden inauguration: See who's performing, how to watch live 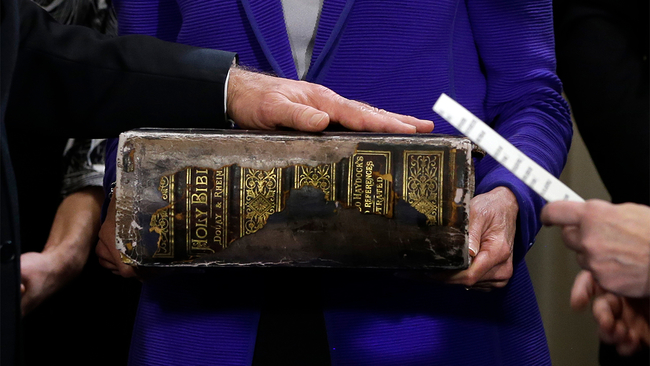 Biden will be sworn in with family Bible during inauguration

The long, painful road that brought Biden to Oval Office