AP
By Bobby Caina Calvan
TALLAHASSEE, Fla. -- The chief architect of Florida's coronavirus website was fired this week after a dispute over what information should be made public, underscoring how entwined public health data and politics have become as elected officials move to reopen their communities amid the coronavirus pandemic.

Florida Gov. Ron DeSantis has said his decision to begin reopening his state has been driven by science, and federal epidemiologists have praised his administration's daily release of COVID-19 related data as especially granular and user-friendly.

But questions about the integrity of the state's public health data were raised anew when Rebekah Jones, an information systems manager with the Florida Department of Health, announced in an email to researchers Friday that she was reassigned from her duties overseeing an online dashboard that provides daily snapshots of Florida's COVID-19 infections, testing and deaths.

In preparation for reopening the state, DeSantis has lashed out against early prognostications of gloom and doom, saying in recent weeks that many of the state's hospital beds are lying empty and some testing sites were closed because there was not much demand.

He's used data from the dashboard - including the relatively low rate of people testing positive for the coronavirus - to build support for reopening the state. Still, he said, reopening will happen in phases. This week, restaurants and retail businesses were allowed to open at 50% capacity.

But the firing has provided new fodder against the Republican governor as he defends his handling of the coronavirus outbreak. DeSantis has also come under fire for his handling of the state's unemployment system, which broke down after being inundated by hundreds of thousands of Floridians who suddenly lost their jobs because of the economic downturn caused by the outbreak.

Here's a look at the difference between two types of coronavirus tests, a diagnostic test and an antibody test.

"We were told the reopening Florida was built on studying the data. If that data was wrong or manipulated, that puts countless Floridians at risk for exposure to COVID-19," said state Rep. Tracie Davis, a Democrat from Jacksonville and a member of the House Health Committee.

"We do know our state is being reopened and we now have a question mark about the data," she said.

The timing of her reassignment came a day after the state's May 4 rollout of the first phase of the governor's reopening plan. It was unclear if Jones was being asked to make Florida appear more solidly in compliance with the White House's criteria for reopening. At the time, Florida was showing a downward trajectory in new infections and rates of positive tests - as well as meeting the rest of the federal criteria.

During a Tuesday press conference, DeSantis dismissed the matter as "a nonissue" and praised the dashboard as a national model.

Afterward, the governor's spokeswoman, Helen Ferre, said in an email that Jones had "exhibited a repeated course of insubordination," asserting that Jones had made "unilateral decisions to modify the Department's COVID-19 dashboard without input or approval from the epidemiological team or her supervisors."

Jones, whose dismissal Monday was first reported by Florida Today, could not be reached for comment.

In an email she sent Friday to researchers and others, Jones said that as of May 5 she was no longer in charge of the dashboard and said she would not expect "the same level of accessibility and transparency" in the data presented on the dashboard, adding that her "commitment to both is largely (arguably entirely) the reason I am no longer managing it."

Jones was more pointed in an email to a West Palm Beach television station, CBS12 News, when she said she was removed from her role because she would not "manually change data to drum up support for the plan to reopen." It was unclear what data she was asked to change.

"Regardless of what you think about the reopening in Florida, you'd like to know how it's going," said professor Ben D. Sawyer, who runs the University of Central Florida's LabX. "The data is our ability to see, and I want to believe the state is here to help keep everyone safe and healthy and give us the ability to see how things are going."

Part of the data-driven research being conducted by his team focuses on looking at how the virus is hitting different age groups.

Sawyer said he and other researches will have to scrutinize the data more deeply as they consider whether information scraped from the site is being manipulated for political reasons.

"Even if the data is transparent, now that we've basically run into an issue where somebody said it might not be transparent and where they fired somebody for refusing to do something they didn't feel comfortable doing, that makes us believe the data might not be accurate," said Jennifer Larsen, a LabX research assistant.

"If you don't trust something that you're hearing, how can you know to make good decisions with it?"

During an April 20 news conference, Dr. Deborah Birx, the coronavirus response coordinator for the White House, singled out Florida's dashboard for praise.

The dashboard debuted on March 16, providing a detailed glimpse of where coronavirus has hit, how many Floridians have tested positive for the infection, how many have been hospitalized and how many people have died. Over the weeks, new information was added, including the number of infections by ZIP codes.

After some prodding by the news media, the state also began releasing data on nursing homes and prisons, although it has declined to disclose some information that is now part of public records lawsuits filed by several news media companies.

In the early weeks of the outbreak, health officials cited privacy issues in declining to identify where infections were occurring only to reverse themselves when public concern over the outbreak grew and quickly became a political issue.

Learn more about coronavirus symptoms and other helpful information during the COVID-19 pandemic. Long Beach to begin vaccinating people under 65 with disabilities 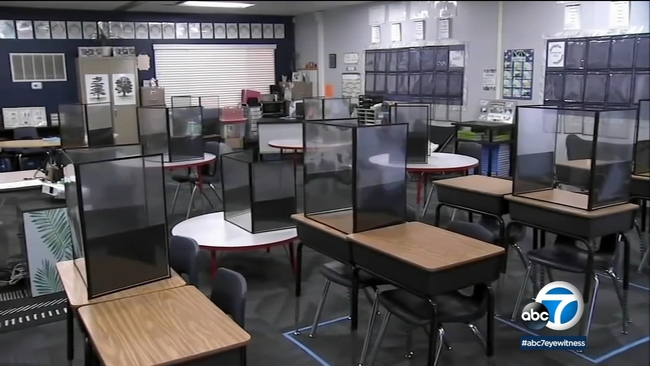 Back to school: Tips for transitioning back to the classroom