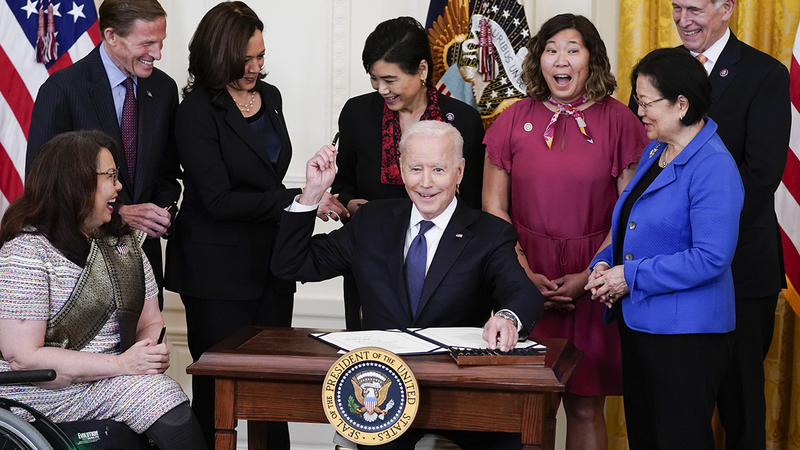 Biden has previously urged Congress to pass the legislation, called the Covid-19 Hate Crimes Act. The bill will create a new position at the Justice Department to expedite review of potential Covid-19-related hate crimes and incidents reported at the federal, state or local level.

It will also direct the Justice Department and Health and Human Services to work with community-based organizations to issue guidance raising awareness of hate crimes during the pandemic, and would require the attorney general to issue guidance to work with state and local law enforcement agencies to establish online reporting of them.

The legislation passed in the Senate with an overwhelming 94-1 vote in April. And earlier this month, the House voted 364-62, with all the no votes being Republicans. The bill was introduced by New York Democratic Rep. Grace Meng and Hawaii Democratic Sen. Mazie Hirono.

Reported hate crimes against Asians in 16 of the nation's largest cities and counties are up 164% since this time last year, according to a recent study from the Center for the Study of Hate and Extremism at Cal State University San Bernardino.

Separately, Stop AAPI Hate, which tracks reports of racism and discrimination against Asian Americans, says it has received more than 6,000 firsthand complaints since last year. The group began tracking violence and harassment on March 19 last year as more Asian Americans were verbally and physically assaulted while erroneously being blamed for the Covid-19 pandemic.

Lawmakers are invited to Friday's signing ceremony in the East Room of the White House, an aide told CNN.

Early in his tenure as president, Biden signed an order which established that it is the policy of his administration to condemn and denounce anti-Asian bias, specifically addressing anti-Asian bias in the wake of the coronavirus pandemic.

The order came in stark contrast to terminology frequently used by former President Donald Trump, GOP officials and Trump administration officials to refer to Covid-19 during Trump's time in office. The World Health Organization and the US Centers for Disease Control and Prevention provided the official terminology for the virus in February 2020 and the global health organization also advised not to use geographic locations in naming diseases because it creates a stigma.