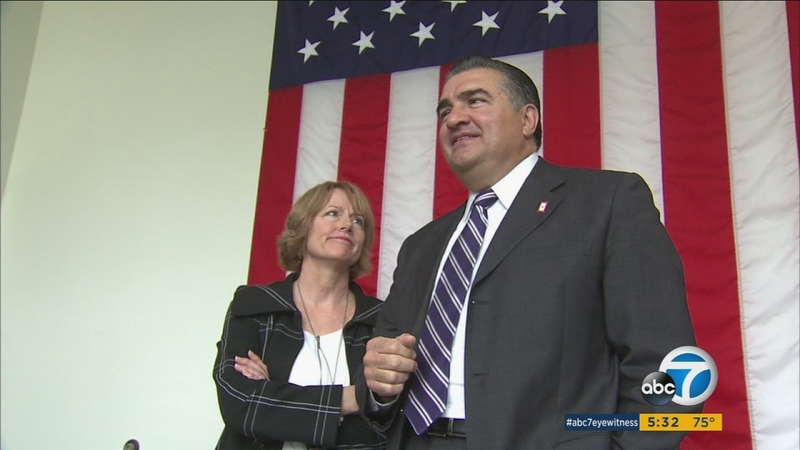 SANTA CLARITA, Calif. (KABC) -- A heated campaign in the California Assembly's 38th District, which stretches from the Santa Clarita Valley to Simi Valley, is receiving even more attention amid allegations of sexual harassment against one of the candidates.

Acosta is fighting scandalous accusations from a member of his own party.

In an interview, with his wife by his side, Acosta produced what he said was every text message sent between him and his accuser, GOP campaign consultant Jennifer Van Laar.

The texts follow Van Laar's leaked email alleging Acosta was "constant skirt chasing," that in a private meeting "instead of talking about his political future, he propositioned me," and that later he sent drunk texts.

Van Laar declined to comment on camera, but told Eyewitness News she stands by her story.

Acosta described the allegations as retribution, saying Van Laar wanted to run his campaign but he hired someone else.

"I have evidence that clearly demonstrates that the accusations are untrue," Acosta said at a public appearance.

The assembly district typically goes Republican, yet this year Democrats aim to change that.

"For the first time ever voter registration plurality is now Democrat, not Republican. That place is changing," Eric C. Bauman of LA County Democrats said.

The Democratic Party is pouring money into the race like never before.

Acosta, in a video posted to his Facebook page last Monday, said his Democratic opponent is piling on, circulating shadowy pictures of him when he played bit parts in movies.

"My opponent is trying to portray me as a Mexican two-bit thug," Acosta said.

Smith declined to be interviewed for the story.

Acosta said despite his troubles, he has not lost a single endorsement including those from current Assemblyman Scott Wilk and Congressman Steve Knight.