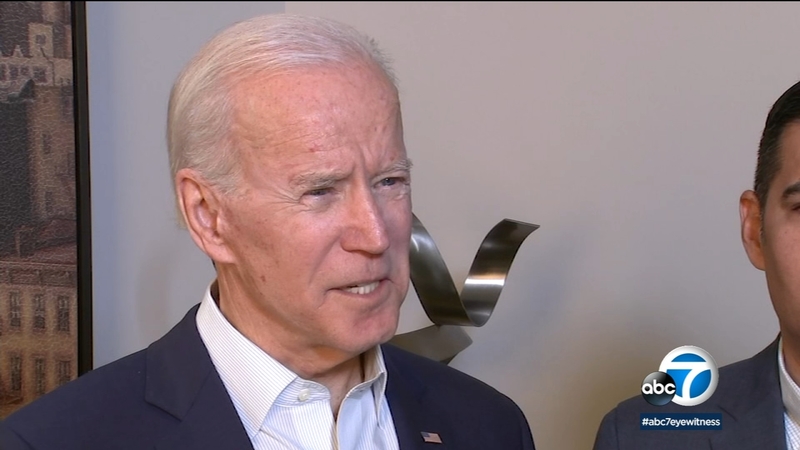 LOS ANGELES (KABC) -- Facing opponents with mountains of cash and attacks from the right and the left, Democratic presidential candidate Joe Biden said he's not worried about a new poll that shows him in a virtual dead heat in California.

The former vice president sat down with Eyewitness News anchor Marc Brown for an exclusive one-on-one interview in the wake of him picking up two key endorsements, one from Los Angeles Mayor Eric Garcetti and another from Long Beach Mayor Robert Garcia.

"I think everybody about this time are just starting to make up their minds," Biden said regarding the poll.

"I think he'll be able to spend all the money in the world, but I think it takes more than money to be able to win an election," Biden said.

"What the last 10 days shows is we need somebody who's going to be ready on day one to make up for the serious mistakes this president has made, particularly in the area of foreign policy," he said.

Biden is critical of the killing of Iranian Gen. Qassem Soleimani, saying the Obama administration passed on such a strike after carefully concluding the benefit of killing Soleimani was not worth the potential cost.

"I think we are less safe now," Biden said. "We're surging another 20,000 troops to the region. We're telling Americans to leave, we're in a situation where we may have to leave the country. Our NATO allies are making a moral equivalence between us and Iran."

"The president doesn't seem to be prepared to listen to the experts in his administration and most of them have left," he added.

California moved up its primary election to Super Tuesday, making it much more important to the process of selecting a nominee, so the candidates are spending more time in the state.

Biden was asked what he would do about Southern California's homeless crisis.

"The idea that there should be homeless people on the street is just not rational in today's world," he said. "I have a program that invests billions of dollars into providing for affordable housing, as well as dealing with getting people off the streets."

"He lost the state, so I guess that's the reason he's doing what he's doing," Biden said. "I just know that his conduct has been beneath the office of the presidency."

He calls California a real test for a candidate's viability on the national stage.