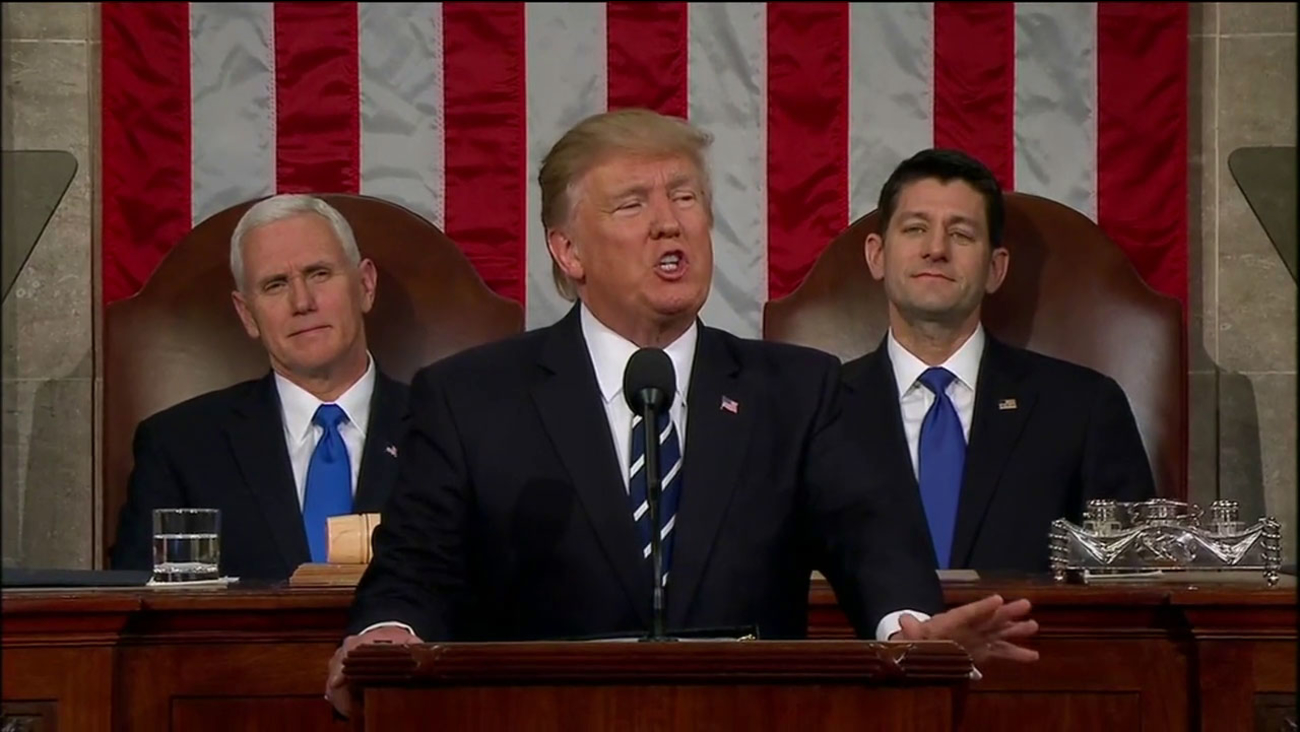 WASHINGTON -- The Associated Press compared claims made in President Donald Trump's speech to Congress with the actual facts:

TRUMP SAID: "We've saved taxpayers hundreds of millions of dollars by bringing down the price" of the F-35 fighter jet.

THE FACTS: The cost savings he persists in bragging about were in motion before he became president.

The head of the Air Force program announced significant price reductions in the contract for the F-35 fighter jet Dec. 19 - after Trump had tweeted about the cost but weeks before he met the company's CEO about it.

Pentagon managers took action even before the election to save money on the contract. Richard Aboulafia, an analyst with the aerospace consulting firm Teal Group, says there is no evidence of any additional cost savings as a result of Trump's actions.

TRUMP: His budget plan will offer "one of the largest increases in national defense spending in American history."

TRUMP: "According to data provided by the Department of Justice, the vast majority of individuals convicted for terrorism-related offenses since 9/11 came here from outside of our country. We have seen the attacks at home - from Boston to San Bernardino to the Pentagon and yes, even the World Trade Center."

THE FACTS: It's unclear what Justice Department data he's citing, but the most recent government information that has come out doesn't back up his claim. Just over half the people Trump talks about were actually born in the United States, according to research from the Department of Homeland Security revealed last week. That report said of 82 people the government determined were inspired by a foreign terrorist group to attempt or carry out an attack in the U.S., just over half were native-born citizens.

Even the attacks Trump singled out weren't entirely the work of foreigners. Syed Rizwan Farook, who along with his Pakistani wife killed 14 people in the deadly 2015 attack in San Bernardino, California, was born in Chicago.

It's true that in the immediate aftermath of Sept. 11, the FBI's primary concern was with terrorists from overseas feared to be plotting attacks in the United States. But that's no longer the case.

TRUMP: "According to the National Academy of Sciences, our current immigration system costs America's taxpayers many billions of dollars a year."

THE FACTS: That's not exactly what that report says. It says immigrants "contribute to government finances by paying taxes and add expenditures by consuming public services."

The report found that while first-generation immigrants are more expensive to governments than their native-born counterparts, primarily at the state and local level, immigrants' children "are among the strongest economic and fiscal contributors in the population."

The report found that the "long-run fiscal impact" of immigrants and their children would probably be seen as more positive "if their role in sustaining labor force growth and contributing to innovation and entrepreneurial activity were taken into account."

TRUMP: "Obamacare is collapsing and we must act decisively to protect all Americans. .... So I am calling on all Democrats and Republicans in Congress to work with us to save Americans from this imploding Obamacare disaster."

THE FACTS: There are problems with the 2010 health care law, but whether it's collapsing is hotly disputed.

One of the two major components of the Affordable Care Act has seen a spike in premiums and a drop in participation from insurers. But the other component, equally important, seems to be working fairly well, even if its costs are a concern.

Trump and congressional Republicans want to repeal the whole thing, which risks leaving millions of people uninsured if the replacement plan has shortcomings. Some critics say GOP rhetoric itself is making things worse by creating uncertainty about the future.

The health law offers subsidized private health insurance along with a state option to expand Medicaid for low-income people. Together, the two arms of the program cover more than 20 million people.

Republican governors whose states have expanded Medicaid are trying to find a way to persuade Congress and the administration to keep the expansion, and maybe even build on it, while imposing limits on the long-term costs of Medicaid.

While the Medicaid expansion seems to be working, the markets for subsidized private health insurance are stressed in many states. Also affected are millions of people who buy individual policies outside the government markets, and face the same high premiums with no financial help from the health law.

Larry Levitt of the nonpartisan Kaiser Family Foundation says "implosion" is too strong a term. An AP count found that 12.2 million people signed up for this year, despite the Trump administration's threats to repeal the law.

TRUMP: "We will provide massive tax relief for the middle class."

THE FACTS: Trump has provided little detail on how this would happen. Independent analyses of his campaign's tax proposals found that most of the benefits would flow to the wealthiest families. The richest 1 percent would see an average tax cut of nearly $215,000 a year, while the middle one-fifth of the population would get a cut of just $1,010, according to the Tax Policy Center, a joint project by the Brookings Institution and Urban Institute.

TRUMP: "We will stop the drugs from pouring into our country and poisoning our youth - and we will expand treatment for those who have become so badly addicted."

THE FACTS: Addicts and mentally ill people who gained access to treatment programs for the first time as a result of the Obama-era health care law are worried about the consequences if it's repealed as Trump calls for. Repeal could end coverage for 1.8 million people who have undergone addiction or mental health treatment, and cut $5.5 billion in spending on such services, according to estimates by economist Richard Frank, a former Obama administration official now at Harvard Medical School.

The key question is what will happen to Medicaid as a result of changes Republicans are pursuing. Broadly speaking, Republicans want to transform the health insurance program for low-income people from an open-ended federal entitlement to a system that provides states with a limited amount of financing and gives them latitude on how to spend it.

If Congress is too stingy with the state allotments, states would be hampered dealing with emergencies like the opioid epidemic.

TRUMP: "Since my election, Ford, Fiat-Chrysler, General Motors, Sprint, Softbank, Lockheed, Intel, Walmart and many others have announced that they will invest billions of dollars in the United States and will create tens of thousands of new American jobs."

THE FACTS: Many of the announcements reflect corporate decisions that predate Trump's presidential election, making it unlikely that his administration is the sole or even the primary reason for the expected hiring.

In the case of Intel, construction of the Chandler, Arizona, factory referred to by Trump actually began during Barack Obama's presidency. The project was delayed by insufficient demand for Intel's high-powered computer chips, but the company now expects to finish the factory within four years because it anticipates business growth.

Still, even as some companies create jobs, others are laying off workers. The best measure of whether more jobs are actually being created are the figures in the monthly employment reports issued by the Labor Department, which nets out those gains and losses. The department will issue its report for February, the first full month of Trump's term, on March 10.