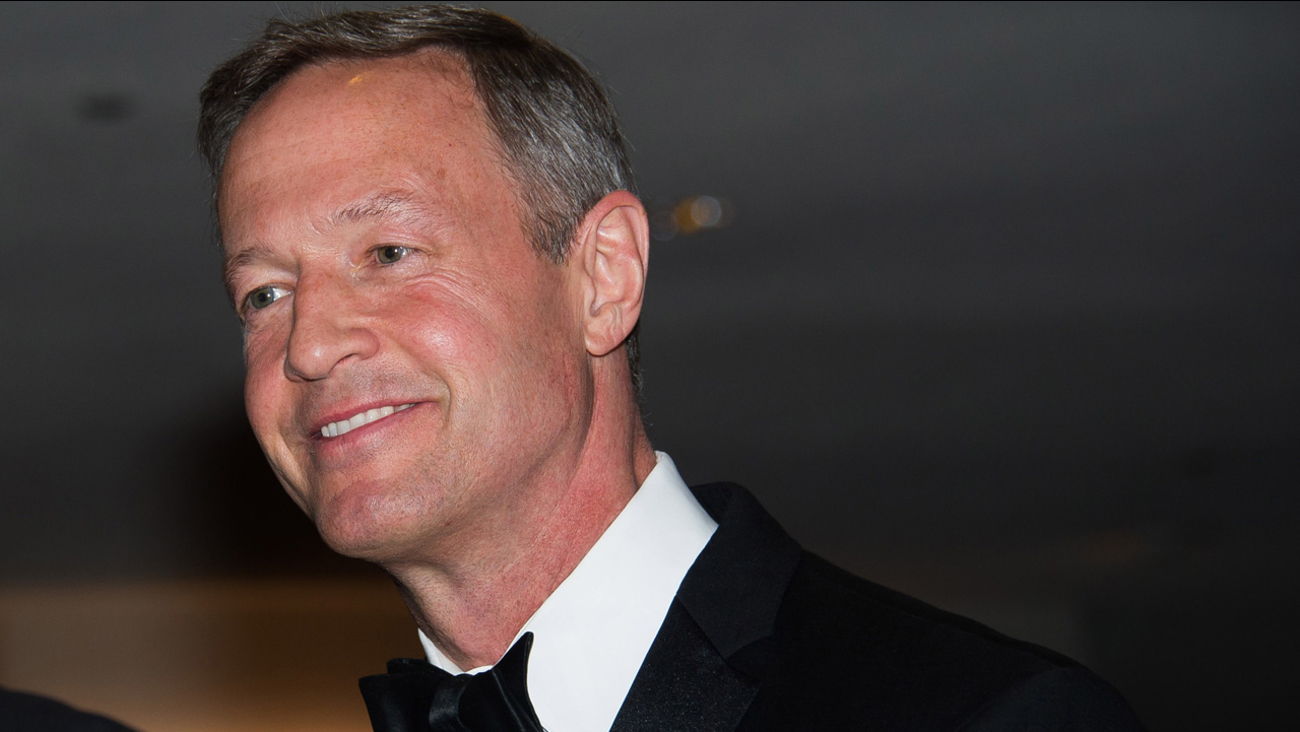 BALTIMORE -- Former Maryland Gov. Martin O'Malley on Saturday joined the Democratic presidential race with a longshot challenge to Hillary Rodham Clinton for the 2016 nomination and tried to stake a position to her left on the economy and Wall Street reform.

"I'm running for you," he told a crowd of about 1,000 people, serving up a populist message at Federal Hill Park in Baltimore, where he served as mayor before two terms as governor. He said "the urgent work" drawing him into the campaign was "to rebuild the truth of the American dream for all Americans."

O'Malley has made frequent visits in recent months to early-voting Iowa, where he was headed later Saturday, and New Hampshire, his destination Sunday. Still, he remains largely unknown in a field dominated by Clinton.

Already in the race is Vermont Sen. Bernie Sanders, who could be O'Malley's main rival for the support of the Democratic left.

An ally of former President Bill Clinton, O'Malley was the second governor to endorse Hillary Clinton's presidential campaign in 2007. But he said Democrats deserve a choice in the 2016 primary.

He pointed to recent news reports that Goldman Sachs CEO Lloyd Blankfein would be "fine" with either Clinton or former Florida Gov. Jeb Bush, a leading Republican contender and the son and brother of presidents, in the White House.

It was a forceful message that O'Malley will focus on overhauling the financial system, a priority for liberals opposed to the bailouts of Wall Street banks.

The 52-year-old O'Malley has spoken often about the economic challenges facing the nation and said he would bring new leadership, progressive values and the ability to accomplish things.

"Our economic and political system is upside down and backward and it is time to turn it around," he told the crowd. "We are allowing our land of opportunity to be turned into a land of inequality."

O'Malley has presented himself to voters as a next-generation leader for the party, pointing to his record as governor on issues such as gay marriage, immigration, economic issues and the death penalty.

Just weeks ago, riots in Baltimore broke out following the death of Freddie Gray, an African-American man who died in police custody following his arrest last month.

A few demonstrators gathered near Federal Hill Park to protest O'Malley's criminal justice policies as mayor, an office he held from 1999 until his election as governor in 2006. "He's claiming to be this savior of Baltimore, but he's not," said Duane Davis, who said he is homeless.

During O'Malley's speech, there was sporadic shouting from protesters, including one who blew a whistle.

And O'Malley's speech did not go off without a logistical hitch. Technicians lost audio on an introductory video before he took the stage.

O'Malley was known for his tough-on-crime, "zero tolerance" policies that led to large numbers of arrests for minor offenses. Critics say it sowed distrust between police and the black community. Supporters note the overall decrease in violent crime during his tenure.

O'Malley has defended his work to curb crime, saying he helped address rampant violence and drug abuse. He has said the unrest in Baltimore should wake up the nation to the need to address despair in poor communities.

"Last month, television sets around the world were filled with the anger and the rage, and the flames of some of the humblest and hardest hit neighborhoods of Baltimore. For all of us who have given so much of our energies to making our city a safer, fairer, more just and more prosperous place, it was a heartbreaking night in the life of our city," O'Malley said.

Megan Kenny, who held a sign that said "stop killer cops" and yelled "black lives matter," said she thought O'Malley's decision to run was "a strange choice," especially because of the recent rioting. She attributed the unrest to his "ineffective zero-tolerance policy."

The 38-year-old Baltimore resident said she thought O'Malley's decision to run was "very bizarre and out of touch."

O'Malley could soon be joined in the Democratic field by former Rhode Island Gov. Lincoln Chafee, who plans to make an announcement next week, and former Virginia Sen. Jim Webb, who is exploring a potential campaign.

Sanders has raised more than $4 million since opening his campaign in late April and sought to build support among liberals in the party who are disillusioned with Clinton.

One of O'Malley's first tasks as a candidate would be to consolidate support among Democrats who are reluctant to back Clinton and eyeing Sanders.