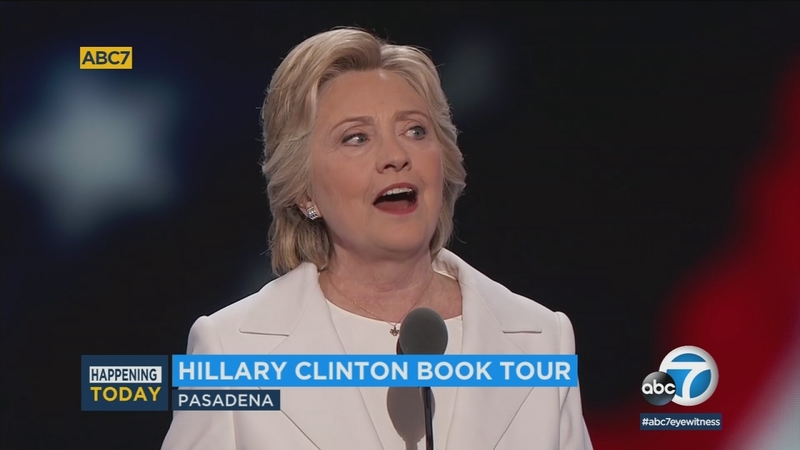 PASADENA, Calif. (KABC) -- Former secretary of state and first lady Hillary Clinton is scheduled to appear at a sold-out book signing for her new memoir Friday afternoon at a bookstore in Pasadena.

Hours before the 2 p.m. event, hundreds of people were seen lined up outside Vromans Bookstore on Colorado Boulevard. They were eager for the onetime Democratic presidential nominee to sign their copy of "What Happened," her account of the 2016 presidential campaign.

Tickets to the event were sold out within 90 minutes last month, according to Vromans.

In the book, Clinton looks back at the campaign and her interactions with then-GOP nominee Donald Trump - including awkward moments that were watched by millions on the debate stage.

"What Happened" also addresses Russia's alleged interference in the election, as well as her regrets on the campaign trail, saying she should have stayed away from anything having to do with Wall Street. She was heavily criticized at the time for giving several speeches to bankers, for which she was paid six-figure speaking fees.

Soldier charged with assault after video shows him accosting Black man
Defense expert: George Floyd died from heart trouble, not restraint | LIVE COVERAGE
Dems to introduce bill that would expand Supreme Court from 9 to 13
JLo, A-Rod announce breakup in new statement
Ex-Minnesota cop faces hearing in shooting of Daunte Wright
Show More
Popular teacher killed in shootout with Mexican drug cartel
How many people in your area are hesitant to get the COVID-19 vaccine?
Listen to this: Scientists translate spider webs into music
Tax Day is not April 15 this year, pushed until next month
Authorities: Woman tried to smuggle $94K of cocaine into US
More TOP STORIES News