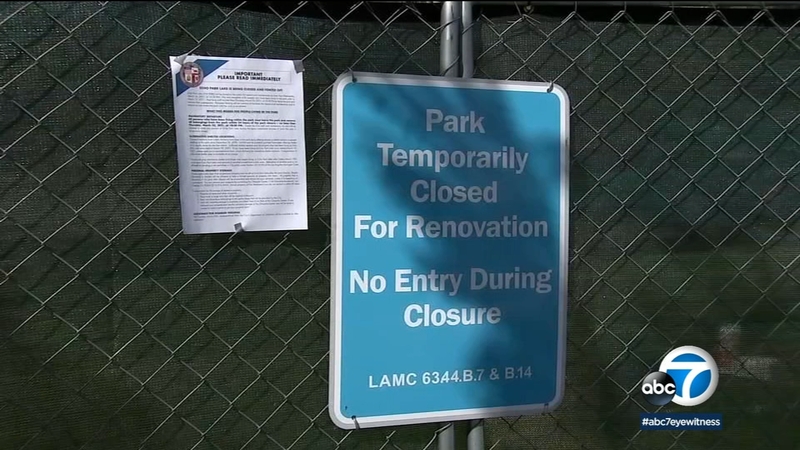 ECHO PARK, LOS ANGELES (KABC) -- After two nights of protests and dozens of arrests, homeless encampments at Echo Park Lake have been cleared.

On Wednesday, the city posted notices that the park would be closed for repairs and everyone living there had just 24 hours to leave.

That prompted a tense situation for two nights as homeless advocates faced off with LAPD. The department said a crowd used "high-intensity lights" to try to blind officers, prompting them to declare an unlawful assembly in the area of Lemoyne Street and Park Avenue around 8:10 p.m. Thursday and issue a dispersal order shortly later.

Some homeless advocates faced off with LAPD Thursday evening after the groups clashed the previous night.

More than 180 protesters were arrested for failure to disperse and three people who identified themselves as members of the media and another three who said they were with the National Lawyers Guild were released at the scene. NLG members observe demonstrations to protect the rights of protesters.

The LAPD said the declaration of unlawful assembly was announced at least five times and members of the media were asked to remove themselves from the crowd.

When reporters were detained along with protesters, representatives of the police media relations team were brought in to identify them and they were released without being arrested, police said.

Mitch O'Farrell, the City Council member who represents the Echo Park area, has spearheaded efforts to remove the camp, house its residents elsewhere and repair what he has described as hundreds of thousands of dollars worth of damage.

His office says the park has damaged lighting and plumbing that needs to be fixed, as well other public safety improvements that need to be made.

On Friday morning, fencing surrounded the area with empty tents scattered throughout the park.

"This is the largest housing transition of an encampment ever in the city's history, where we've successfully brought more than 200 people that were unhoused, indoors," said Mayor Eric Garcetti.

James David has called the park home for about a year. He was able to stay with family Thursday night but returned to the park on Friday to try and work with a service provider and secure transitional housing through Project Roomkey.

"I'm still, nevertheless, in the same situation and I want to better my situation. I need housing and stuff, he said.

As of Friday morning, only two people experiencing homelessness were left in the park.

As of January 2020 there were more than 41,000 homeless people within Los Angeles city limits. The annual count was canceled for 2021 because of the coronavirus pandemic.