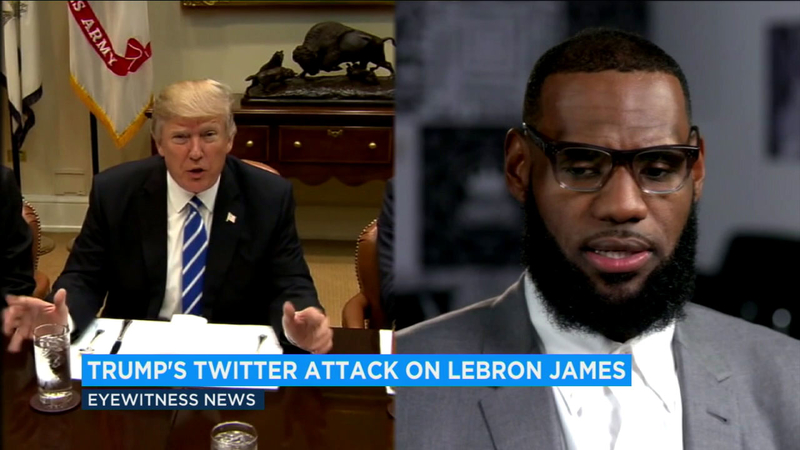 LOS ANGELES -- First Lady Melania Trump, Michael Jordan, and Lakers owner Jeanie Buss are among those who are coming to the defense of LeBron James after a tweet from President Donald Trump questioning the NBA star's intelligence.

The president tweeted after an interview James did with CNN anchor Don Lemon that Lemon was "the dumbest man on television" but that he "made Lebron look smart, which isn't easy to do."

James was being interviewed about a school he recently opened in Ohio for underprivileged children.

Trump's tweet came the night before he was to appear at a political rally in Ohio.

Trump's rally Saturday night at a high school in Columbus lasted for more than an hour, and while he attacked Democrats and other familiar targets, he never mentioned the home-state hero and former Cleveland Cavaliers star.

Melania Trump's spokeswoman quickly distanced the first lady from the criticism of James, saying in a statement Saturday afternoon that it appeared James was "working to do good things on behalf of our next generation" and that the first lady would be open to visiting his new school for at-risk children.

The statement didn't criticize the president.

In his tweet, Trump also appeared to weigh in on the growing debate over who is the greatest NBA player of all time, James or Michael Jordan, by writing "I like Mike!"

Many former and current professional athletes, including Jordan, jumped to James' defense.

"I support LeBron James. He's doing an amazing job for his community," Jordan said in a statement to The Associated Press through his representative via text Saturday.

James joined the Lakers this summer as one of the most-coveted free agents in NBA history.

"We could not be more proud to have LeBron James as part of our Lakers family. He is an incredibly thoughtful and intelligent leader and clearly appreciates the power that sports has to unite communities and inspire the world to be a better place. Those efforts should be celebrated by all."

Trump has long denounced the media - CNN in particular - and rarely lets a slight go unnoticed. But the attack on James, who was being interviewed by another black man, to some resembled a racial dog whistle. He routinely deems Democratic Rep. Maxine Waters of California, who is also black, as "low IQ" - an insult he repeated during the Ohio rally Saturday night.

Ohio Gov. Josh Kasich, a Republican who at times criticizes Trump, tweeted: "Rather than criticizing KingJames, we should be celebrating him for his charity work and efforts to help kids."

Trump has repeatedly been questioned about his views on race, from deeming many Mexican immigrants "rapists" during his campaign kickoff speech for the Republican presidential nomination to placing blame on "both sides" for the violent clash between white supremacists and counterprotesters in Charlottesville, Virginia, a year ago.

James, who campaigned for Trump's opponent, Democrat Hillary Clinton, and has not been shy about using his celebrity for social causes, did the interview from the public school he opened, called the "I Promise" school. Every student receives free tuition, as well as free food, a uniform and even a free bike.

In the interview, James said he "would never sit across" from Trump, though he would talk to former President Barack Obama. James' publicist declined to respond to Trump's tweet, but early Saturday afternoon, James retweeted a post from the "I Promise" school and said: "Let's get it kids!! Love you guys."

Other players from around the league, including Golden State's Stephen Curry, Minnesota's Karl-Anthony Towns and Utah's Donovan Mitchell, came to James' defense on social media after Trump's tweet.