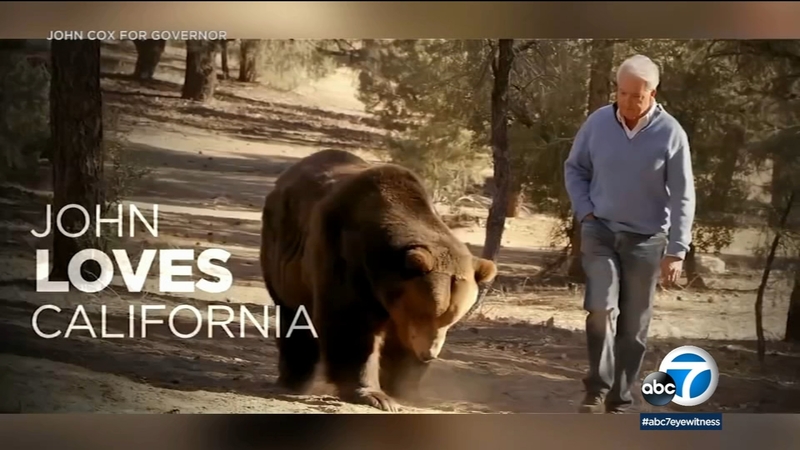 SAN FRANCISCO -- Beauty vs. the Beast -- that is how Republican John Cox is framing his campaign against California Gov. Gavin Newsom.

The former gubernatorial candidate, who lost to Newsom in a landslide in 2018, is hoping for a do over through the recall election. On Tuesday, he launched his biggest effort yet: a $5 million ad buy that will air on television across the state.

The ad begins with Newsom looking at himself in a mirror as a voiceover says Californians will have a choice between voting for "pretty boy" Newsom or "the beast," Cox.

Beauty vs. the Beast -- that is how Republican John Cox is framing his campaign against Governor Gavin Newsom.

The ad ends with a voiceover saying: "Recall the beauty. Meet the nicest, smartest beast in California, John Cox." A spokesperson for Cox said the ad buy is only the first installment with more to follow.

It comes the same day Cox launches a statewide bus tour in Sacramento, where he will be joined by a "special guest" - a 1,000-pound live bear. His second stop? The French Laundry in Napa County where Newsom famously drew ire when he dined there last year.

The new ad and trolling by Cox is yet another reminder of the attacks Newsom will face as the recall heats up.

Celebrity Caitlyn Jenner, who announced her candidacy last month, launched her first campaign video on Tuesday. In the web video, she frames herself as a "compassionate disrupter" fighting against "elitist" career politicians.

Caitlyn Jenner has released her first political ad after announcing her run for California governor.

"I came here with a dream 48 years ago, to be the greatest athlete in the world," she says. "Now I enter a different kind of race, arguably my most important one yet: to save California."

Jenner first rose to public prominence as a world record-breaking Olympic gold medalist in 1976. She came out publicly as a transgender woman in 2015 in an interview with ABC's Diane Sawyer.

The 71-year-old Jenner, whose political stances have evolved through the years, identifies as "economically conservative, socially progressive." After supporting President Donald Trump in the 2016 presidential election, she revoked her support in 2018, citing the administration's attacks on the transgender community.

Newsom -- who has the support of the California Democratic Party and prominent leaders like House Speaker Nancy Pelosi and Vice President Kamala Harris -- has called the Republican recall effort a threat to California values that will hinder the progress he says the state has made on COVID-19, climate change and anti-gun violence since he took office in 2019.

The ads come as an exclusive Eyewitness News poll conducted by SurveyUSA shows Californians are lukewarm to the idea of replacing Newsom.

Those polled were asked:

Who would you support if Governor Newsom is recalled?
Would not support any: 38%
Undecided: 26%
John Cox: 9%
Caitlyn Jenner: 5%

Everything you need to know about the Newsom recall