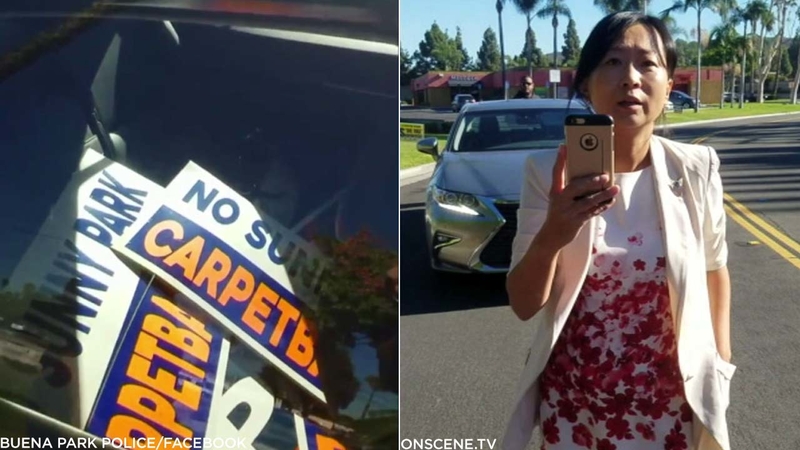 LAKE FOREST, Calif. (KABC) -- As election races heat up, cases of dirty politics are spreading across Orange County, where one city council candidate was arrested for allegedly removing campaign signs.

Park was arrested Friday morning after officers were called to Malvern Avenue and Dale Street.

Video shows Park and a man appear to remove campaign signs that read "No On Sunny."

She was seen with signs piled into the back of a car.

Park was contacted nearby after officers found evidence. She was arrested, cited then released.

Officers are still working on identifying the man with her.

Park says she was taking the signs as evidence, adding that her opponent, Mayor Virginia Vaughn, had placed them in violation of California Fair Political Practices Commission rules. She also said she was being harassed by Vaughn's husband.

In a statement on Facebook, Park said, in part:

"This type of dirty politics has no place in our city and Mayor Vaughn should be ashamed of herself and the type of ugly campaign that she's running."

Vaughn has yet to respond to Eyewitness News' requests for comment.

Another example involves Neeki Moatazedi, who is running for a spot in the Lake Forest City Council.

The flyers claim Moatazedi has a criminal record, and show the fitness and body building competitor in a bikini. The flyers even show a file photo of a dark-haired woman walking in jail.

Moatazedi says the criminal claims are all false and is outraged by the move. She is calling for her opponent, Sonny Morper, to step out of the race.

"They're not showing my opponent in a bathing suit or objectifying his body. I am proud of that hard work, but it was taken out of context and portrayed in a way that was overtly sexual and negative," Moatazedi said.

Morper says he knows nothing about the flyers.

"They are now asking questions relative to my involvement, and I tell you right now, I had zero, absolutely none," Morper said.

Democrat Gil Cisneros has used $8 million of his lottery winnings in his race against Republican Young Kim for the Orange County-based 39th District congressional seat.