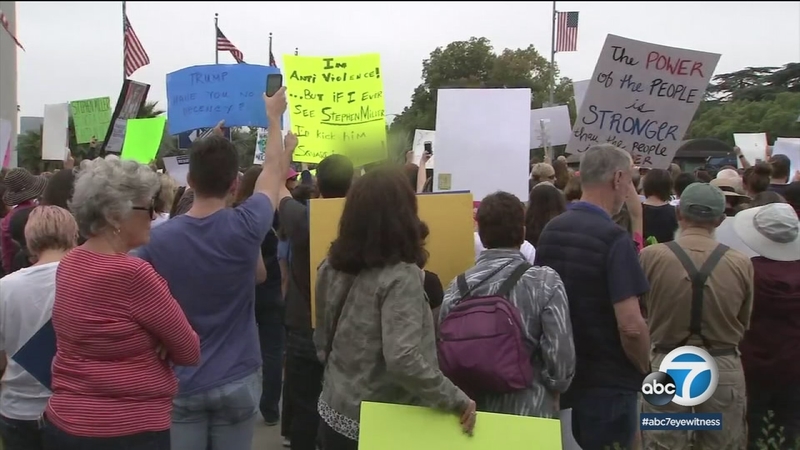 WESTWOOD, LOS ANGELES (KABC) -- Drivers honked their car horns in solidarity as they drove along Wilshire Boulevard and saw a demonstration in Westwood Saturday morning.

The protest was for children still separated from their parents who remain in detention centers due to the Trump administration's zero-tolerance immigration policy.

As people continue to protest across the state, California regulators said Saturday that immediate inspections would start on facilities where immigrant children were being held. Some of those locations are in La Verne and Fullerton.

One 95-year-old demonstrator rolled up to the protest with a sign.

"I'm glad to see so many people. It makes me feel good. I hope they come to the next rally," Helen Alland said.

The protest was organized by Families Belong Together. The group, where more than 100 people showed up, has multiple goals. They've collected toys for children at a detention center in San Diego.

The plan is to drop them off, but there is also a contingency plan if they can't be delivered - all of the items will be given to a nonprofit agency that helps immigrant children.

Other protesters were gathering around to get people to register to vote.

But Sophia Salazar, like other, said their hopelessness feels more bearable when they attend large rallies.

For most of this week, protests have formed in various areas of Los Angeles, including in front of the Metropolitan Detention Center in downtown, and across the nation over the policy.

On Tuesday, President Donald Trump signed an executive order that would no longer separate children from their parents who were caught crossing the border illegally. But many people felt it wasn't enough, especially since the policy was created by the administration in the first place.

Francis Arroyo, a senior immigration attorney who brought her almost 2-year-old daughter with her to the Westwood protest, said the battle isn't over.

"That is the reason why there was so much pressure for President Trump to essentially show the world that he is no longer going to separate families. However, we still have these 2,000 kids that we don't know where they are," she said.

Since early April, when the policy was first announced and enacted, nearly 2,000 children were separated from their parents. Photos of children in cages at detention centers and audio of young kids crying for their parents created public outrage that eventually prompted the executive order.