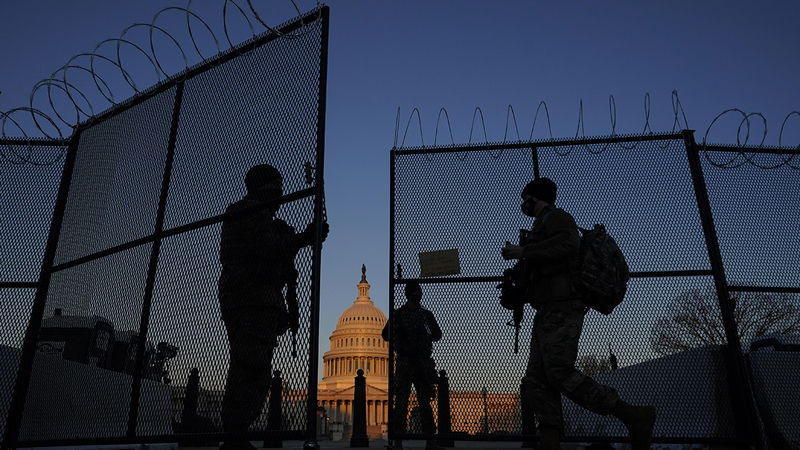 House to vote on commission to probe Jan. 6 Capitol riot

WASHINGTON -- In the midst of the House debate over whether to pass a bipartisan proposal that would establish a commission to dig into the events surrounding the January 6 riot at the US Capitol, Ohio Democratic Rep. Tim Ryan stepped to the microphone -- and delivered what should be a wakeup call to Congress (and the country) about our current moment.

After praising New York Rep. John Katko, the Republican who negotiated the bipartisan compromise to create the commission, Ryan turned to the rest of the House GOP -- and said this:

"To the other 90% of our friends on the other side of the aisle: holy cow. Incoherence. No idea what you're talking about. Benghazi! You guys chased the former secretary of state all over the country, spent millions of dollars. We have people scaling the Capitol, hitting the Capitol Police with lead pipes across the head and we can't get bipartisanship.

"What else has to happen in this country? Cops -- this is a slap in the face to every rank and file cop in the United States.

If you haven't watched it, watch it now. Ryan's anger and frustration are evident. And evidence of what it is like to serve in Congress at this moment where the vast majority of one of the two national political parties is engaged in an attempted rewriting of history -- from the demonstrably false idea that the 2020 election was fraudulent to the idea that the January 6 insurrection, which left five people dead, was akin to a "normal tourist visit."

It is worth noting that 35 Republicans broke ranks and voted to establish the commission, which passed the House but is very likely to die in the graveyard of the Senate now that Senate Minority Leader Mitch McConnell has announced his opposition.

But the vast majority of the House Republican conference -- including Minority Leader Kevin McCarthy (California) and Minority Whip Steve Scalise (Louisiana) -- opposed the commission. And, make no mistake, they did so for political reasons.

As CNN's Manu Raju wrote on Wednesday night:
"Senior Republicans are making clear they have little interest in moving forward with a sweeping January 6 investigation in part because a detailed probe could become politically damaging and amount to a distraction for their party just as control of Congress is at stake in next year's midterm elections.

"Publicly and privately, Republicans are making that case, with Senate GOP Whip John Thune noting that there's concern among some GOP members that the findings of the probe 'could be weaponized politically and drug into next year.'"

McConnell's opposition, too, is rightly understood through the lens of politics. You'll remember that in February, McConnell slammed former President Donald Trump for "a disgraceful, disgraceful dereliction of duty" before, during and after the January 6 riot. What changed his tune between then and now? The Republican base made clear that Trump inciting an insurrection as the US Capitol wasn't disqualifying for them -- and, in fact, made them align even closer to him. And so, McConnell moved -- away from condemning Trump and toward whitewashing the events of January 6.

This is bad for the country. Because the rioters at the Capitol might have been motivated by Trump but they weren't angry at just Democrats: The chants of "Hang Mike Pence" make that very clear.

Ryan, in an interview on CNN's "New Day" Thursday morning, hit the nail on the head.

"I just think it's living in delusion, and they're putting their own politics, their own political careers in front of the truth and in front of what's needed for America and to protect these institutions," he said. "I just think it's shameful. And it's such a sign of the times, unfortunately. But we're trying to get to the truth here. This has nothing to do with partisanship. The people stormed the Capitol. It was an insurrection. And we want to get to the bottom of it. And right now, we don't have a Republican Party that's willing to join us."
Report a correction or typo
Related topics:
politicswashington d.c.riothouse of representativesus capitolcongressviral
TOP STORIES
Hahn, Kuehl call for vaccine, testing mandate for LA County workers
Corona shooting: Suspect's friends believed he had gun in theater
Hydrogen energy at center of Tokyo Olympics
Cities in Japan, SoCal demonstrate the world's hydrogen future
Firefighters battling brush fire in Angeles National Forest
Many SoCal hospital workers haven't gotten the COVID-19 vaccine
Equinox, SoulCycle to require proof of vaccination
Show More
'Magic Key': Disneyland unveils new program to replace annual passes
Dodgers kick off two-game series against Astros
COVID-19 hospitalizations in LA County nearly quadruple in one month
Spirit Airlines, American Airlines cancel more than 800 flights
Majority of huge homeless encampments near Azusa park cleared
More TOP STORIES News