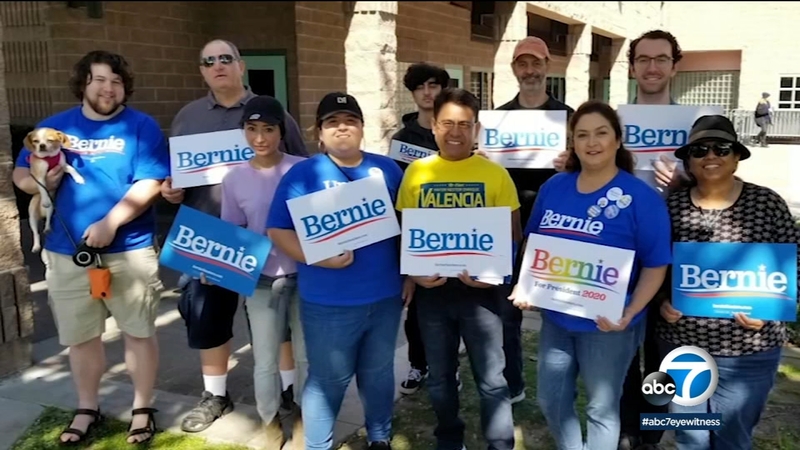 Sanders' SoCal supporters weigh in on whether they'll support Biden

LOS ANGELES (KABC) -- Bernie Sanders announced Wednesday he's no longer a candidate in the race for the democratic nomination.

"I wish I could give you better news, but I think you know the truth. And that is that we are now some 300 delegates behind Vice President Biden and the path toward victory is virtually impossible," Sanders told supporters on his campaign live stream.

"If California had it's way, Bernie Sanders would be the president," said Daniel Andalon, the former L.A. County Director for the Bernie Sanders campaign.

Sanders won the California Primary by roughly 450,000 votes and built a massive campaign across the state drawing thousands to his rallies.

"I don't need a pat on the back. I don't need an olive branch. I don't need to be courted. I just want to know that we are willing to unite the party and that includes the left flank of the party," said Andalon.

"We need to replace the guy in the White House with somebody a hell of a lot better and while my choice was Bernie, I will be backing Biden or whoever the Democratic nominee is to make sure Trump gets out because the American people and the people of Los Angeles need it," said L.A. City Councilmember Mike Bonin.
Councilmember Mike Bonin, another supporter of Sanders said he thinks by November, the progressive wing of the Democratic Party will rally behind Biden.

"I congratulate Joe Biden, a very decent man who I will work with to move our progressive ideas forward," said Sanders.

Sanders discussed the coronavirus epidemic, saying since Trump isn't leading, he can't continue to mount a campaign that would interfere with the work that needs to be done. Andalon says he'll work hard to unite Bernie supporters in an effort to defeat President Donald Trump. He's hopeful Biden will adopt more of Sanders' policies.

"It took a pandemic to show us that as a country, a society, a lot of those policies like Medicare for all and debt cancellation, that it's not just pie in the sky, that that sky is attainable," said Andalon.
Report a correction or typo
Related topics:
politicsbernie sanderssouthern californiaelectionpresident donald trump
Copyright © 2021 KABC-TV. All Rights Reserved.
RELATED