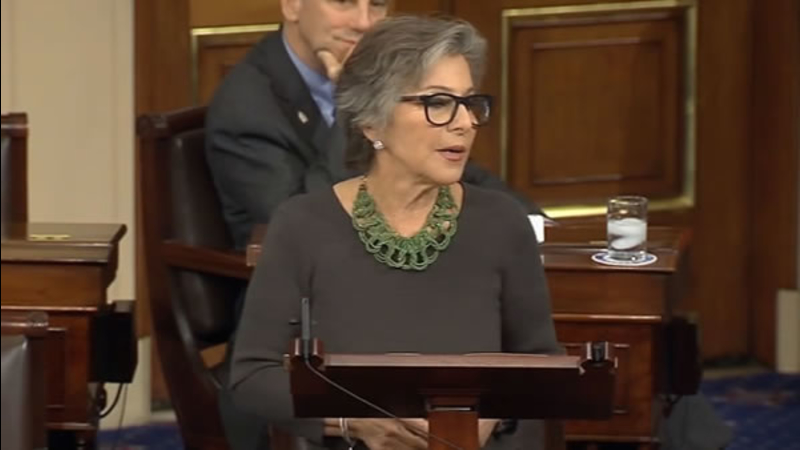 Boxer, who served the last 24 years in the Senate and prior to that 10 years in a House seat representing the Bay Area, is retiring this year.

"This has been a dream," she said. "To be in a profession that I think is noble, no matter how beaten up it gets."

The 76-year-old's career in public office has spanned four decades. Boxer lovingly remembered moments from her run for Marin County Board of Supervisors - she lost the first time but would go on to win in 1976.

"Even from my position as local county representative for only 40,000 people, I was exposed to these national issues that would soon require all of my attention," she said.

Boxer also reflected on early years as a House member, particularly dealing with the AIDS crisis of the 1980s.

Among her top accomplishments in the Senate, Boxer listed the first after-school programs that received federal funding, one million acres of California wilderness preserved, and the first-ever comprehensive combat casualty center in California.

"I am not only fortunate to have had this extraordinary career, but I'm also so fortunate to be going home to a state that stands for everything I believe in," Boxer said.

She comes back to California with her husband of 55 years, Stuart. Boxer says she's ecstatic that state Attorney General Kamala Harris will replace her in the Senate.

Boxer says leaving the Senate is not bittersweet and she holds no bitterness about any of her career.

You can watch her entire speech below.