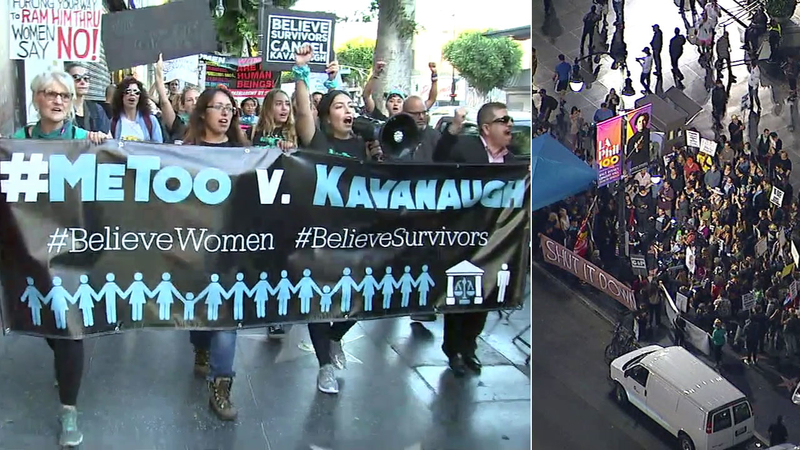 The protesters marched through Hollywood Boulevard and Vine Street, and the demonstration lasted about four hours.

"We see ourselves in her. So for her to not be believed is not believing a lot of us," said Brenda Gutirrez, one of the international founders of the #MeToo March.

Men and women held signs with sayings such as Kava-NOPE and #MeToo v. Kavanaugh and chanted "Kavanaugh is not welcome here." At one point, they even stopped and sang.

Sexual assault survivors also told their stories and urged other survivors to continue coming forward. Other people were there for solidarity.

"I love seeing that there was a lot of men - a lot of cis men - out here supporting as well. I think we have to do more than just show up here, though. We have to show up in our personal spaces, in the places we are in our lives and keep standing up and speaking out," one protester said.

The demonstration was one of many held around the country as Republican senators set up a preliminary vote on Kavanaugh for Friday morning.

In Washington D.C., thousands of people expressed their outrage in front of the Supreme Court building. Comedian and cousin to Sen. Chuck Schumer, Amy Schumer, and actress Emily Ratajkowski were part of the protest and were some of dozens arrested for a sit-in at the Senate office building.

"A vote for Kavanaugh is a vote saying women don't matter," Schumer said during the rally.

In Arizona, several protesters who were at the office of Sen. Jeff Flake were arrested, and hundreds descended in San Francisco.

Following the Senate's decision to move forward in the confirmation process, Kavanaugh wrote an op-ed in the Wallstreet Journal, where he talked about being too emotional during his hearing and saying he should not have said certain things.

He also said that if he is confirmed, he would act as an independent and impartial judge despite his reaction during his testimony in front of the Senate Judiciary Committee last week.

Kavanaugh was investigated by the FBI over allegations of sexual assault in the 1980s after Democrats pressed for the probe last week. The FBI report was sent to Congress overnight and GOP lawmakers briefed on the agency's confidential document said there was no verification of the woman's past claims.

Before Kavanaugh, Dr. Christine Blasey Ford also testified in front of the Senate Judiciary Committee. She recalled details of the alleged incident involving Kavanaugh and one of his friends inside a locked room at a 1982 high school gathering. During the suspected assault, Ford said Kavanaugh tried to take off her clothes, held her down and covered her mouth to keep her from screaming.

After Ford went public with her story, two other women came forward with sexual misconduct allegations against Kavanaugh.