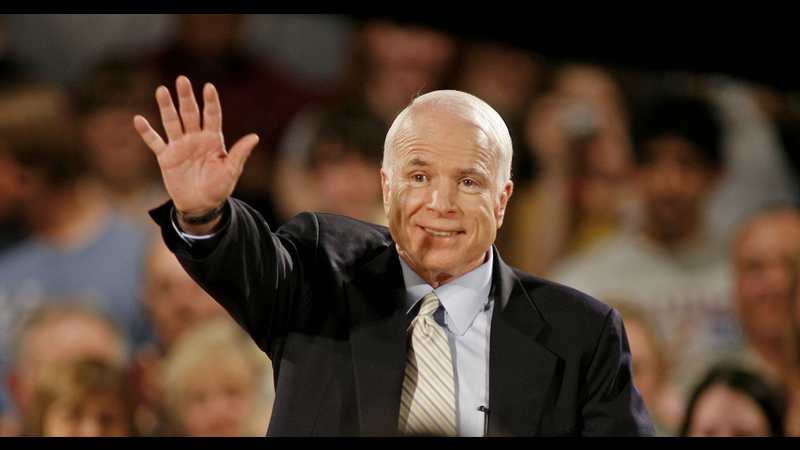 LOS ANGELES (KABC) -- Some Southern Californians are remembering Sen. John McCain as someone they may not have always agreed with, but always respected.

Known for his unswerving defense of democratic values, McCain was a fearless and outspoken voice on policy and politics until the very end.

"It's a tremendous loss for the country. I think we're all in mourning -- Democrats and Republicans tonight - at the loss of a great American hero," said Congressman Adam Schiff.

Schiff, a Democrat from Los Angeles, traveled with the Arizona Republican several times and says the former POW always put his country first.

"He was just everything that this country should stand for, no matter what side you're on," said Valley Village resident Norma Broad. "I feel sad for his family, it was just too soon."

Whether they supported his politics or not, many say they always respected his character: standing up for what he believed, no matter who he faced.

"It's a sad day because, you know, he's a veteran, which I'm a veteran of the Air Force. He did a lot for the country, for his party. He stood up to the -- I would say -- the bullies in politics," shared Studio City resident Devon Edwards.

John McCain was a American hero. He served with courage, honor, and humility. Rest in peace and thank you for serving our nation. Our deepest sympathies to the McCain family. EG

"I was a sailor, too, so in that way there's a connection, but it's always appreciated, even if I opposed his ideas. He was always there for the country, so we're missing a hero today," he said.

From his service to his strength he earned the respect of so many throughout his more than three decades in politics. His courage and his spirit was always shining through.

"To see that kind of demonstration of strength, courage and patriotism, I can't think of another in my lifetime that I've met like him," Schiff said. "And I don't expect there will be another to come along."