Trump and Clinton name one positive thing about each other 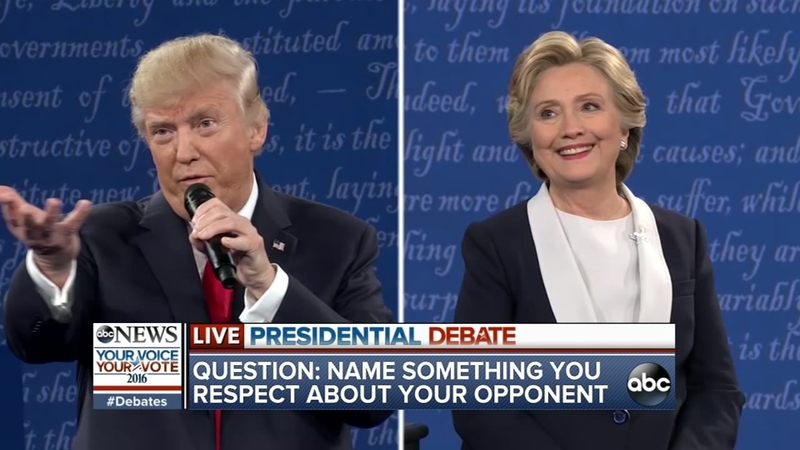 Trump and Clinton name one positive thing about each other

At the close of the second presidential debate on Sunday, October 9, presidential nominees Hillary Clinton and Donald Trump, when asked to, said one thing they respect about each other.

"My question to both of you is, regardless of the current rhetoric," began debate audience member Karl Becker. "Would either of you name one positive thing that you respect in one another?"

The questions was immediately met with applause and laughter. Debate moderator Martha Raddatz asked Donald Trump to go first, though he hesitated. Clinton, then, delivered her response.

"I respect his children," said Clinton. "His children are incredibly able and devoted and I think that says a lot about Donald. I don't agree with nearly anything else he says or does, but I do respect that and I think that is something that as a mother and a grandmother is very important to me. So I believe that this election has become in part so conflict-oriented and so intense because there is a lot at stake. This is not an ordinary time and this is not an ordinary election."

Trump said he considered Clinton's statement about his children to be a "very nice compliment."

"I don't know if it was meant to be a compliment, but it is a great -- I'm very proud of my children, said Trump. "They have done a wonderful job and they have been wonderful, wonderful kids."

"I will say this about Hillary: she doesn't quit, she doesn't give up," said Trump. "I respect that. I tell it like it is. She is a fighter. I disagree with much of what she's fighting for. I do disagree with her judgment in many cases, but she fights hard and she doesn't quit and she doesn't give up, and I consider that to be a very good trait."
Related topics:
politicsdonald trumppresidential racepresidential debateelections2016 electionhillary clinton
Copyright © 2021 KABC-TV. All Rights Reserved.
TOP STORIES
WeHo suspect out on bond 1 day after alleged kidnapping
Imprisoned 'Dating Game Killer' Rodney Alcala, 77, dies in California
Comedian Jackie Mason dies at 93
SoCal man, 34, who mocked vaccines dies of COVID-19
'Stuntman' documentary highlights a legend in the business
Pasadena City College named top community college for veterans
Pearl Harbor remains identified as Navy sailor from CA
Show More
Overdose deaths from meth up in LA County during pandemic
Memorial bike ride honors 1st LAPD officer to die from COVID-19
Mother arrested after 2 young kids left in hot Bakersfield car
Shyamalan's 'Old' presents new ways to think about aging
Vaccines are 'personal decision,' Hillsong Church founder says
More TOP STORIES News