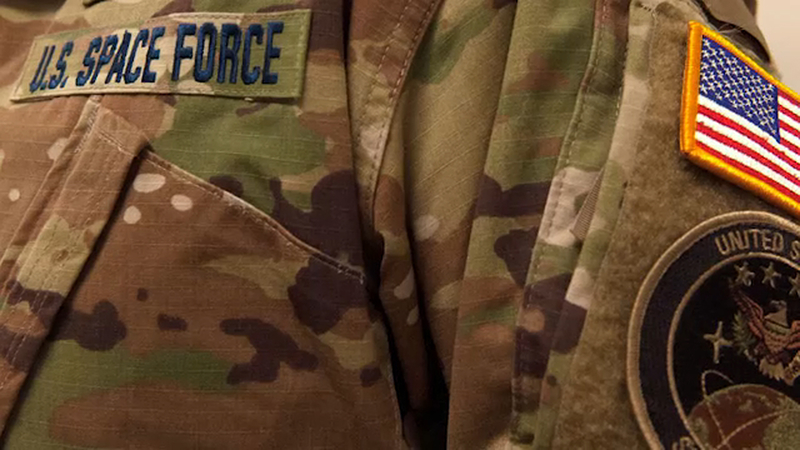 WASHINGTON -- The newest branch of the military has unveiled its new uniforms, and the United States Space Force will wear the same camouflage look as other branches.

The USSF says it is saving costs by sticking with the traditional camo style.

Officials tweeted that service members will look like the joint counterparts they'll be working with on the ground.

The U.S. Space Force became the nation's newest branch of the military when President Donald Trump signed the National Defense Authorization Act, which authorized the creation of the new military service.

Space Force went into operation almost immediately after the legislation was signed into law, but many questions still need to be decided as to how the new military service will function and who will serve in its ranks.

"For the first time since President Harry Truman created the Air Force over 70 years ago, we will create a brand new American military service," Trump said as he signed the defense budget at an event at Joint Base Andrews. "With my signature today, you will witness the birth of the Space Force, and that will be now officially the sixth branch of the U.S. Armed Forces. The Space Force will help us deter aggression and control the ultimate high ground."

Trump has been a strong advocate for the creation of Space Force, which became separate military service alongside the Army, Navy, Marines, Air Force and Coast Guard.

The central role of the Space Force will be to organize, train and equip military personnel whose primary job is space operations within the other military services.

"Now is the time to establish a team, a separate service totally focused on organizing, training and equipping space forces," Barbara Barrett, the Secretary of the Air Force, said at a Pentagon press conference Friday afternoon.

U.S. Space Command, created in August, is a warfighting force responsible for defensive and offensive operations in space.

Initially, the new Space Force will be composed of 16,000 active duty Air Force and civilian personnel currently serving with the Air Force's Space Command. That Air Force Command will cease to exist as its personnel are "assigned" to Space Force. In the coming year, some of those personnel will be officially transferred to the Space Force, while others will remain within the Air Force.

Eventually, personnel from the Army and Navy's space programs will be integrated into the new service.