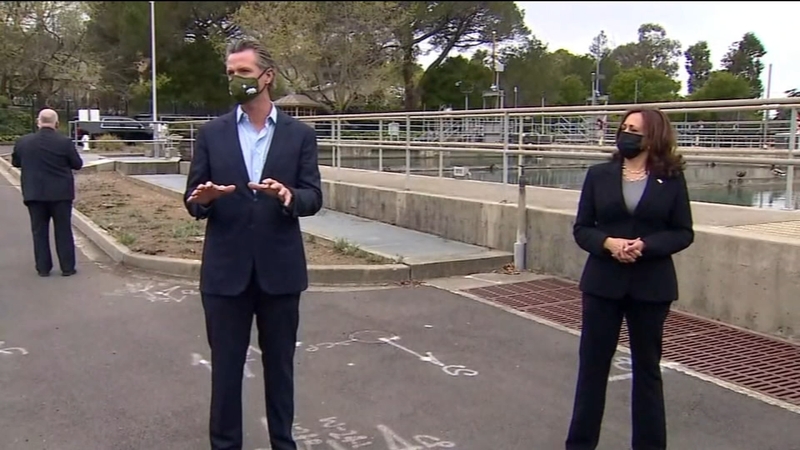 OAKLAND, Calif. -- Vice President Kamala Harris returned to her hometown of Oakland Monday for the first time since taking office.

Harris was joined by Governor Gavin Newsom on a tour of a water treatment facility to highlight the benefits of the American Jobs Plan, which proposes investing $111 billion in the nation's water infrastructure. Harris and President Joe Biden say the plan would help ensure access to clean drinking water and create jobs.

Harris touched down in Oakland at 9:45 a.m. before going to the water treatment plant. She arrived from Los Angeles, where she spent the Easter holiday, and was greeted by Lt. Gov. Eleni Kounalakis, Sen. Alex Padilla and Rep. Barbara Lee.
At the facility, Harris and Newsom met with water plant workers who underwent an apprenticeship program. The vice president said such programs would serve as a model for the rest of the country under the proposed American Jobs Plan.

"This facility and this group have really been doing work that is a model for the country," Harris said.

The plan wouldn't just upgrade infrastructure, but also create jobs and focus on equity, Harris said. The Biden-Harris administration is proposing an upgrade to 100% of the country's lead water pipes, she said.

"And sometimes you can just look and tell when people are telling you the truth and they are going to keep their word and I really fell hopeful and I believe things are going to get better," said Reign Free, Owner of Red Door Catering.

After returning to Los Angeles Monday evening, the vice president heads to Chicago on Tuesday to focus on vaccine equity.

When Harris arrives in Chicago, it will be her first official visit to that city. She will be greeted by Mayor Lori Lightfoot. In a tweet the mayor said that she and the vice president shared a common goal which is to focus on vaccine equity and getting to those hardest hit communities.

Harris was born in Oakland and kicked off her presidential campaign there in January 2019.

She began her career as a prosecutor in the Alameda County District Attorney's Office.

Kamala Harris, the 2020 vice presidential Democratic nominee, grew up in Oakland and started her career in San Francisco. Here's what you need to know about the senator's Bay Area ties.