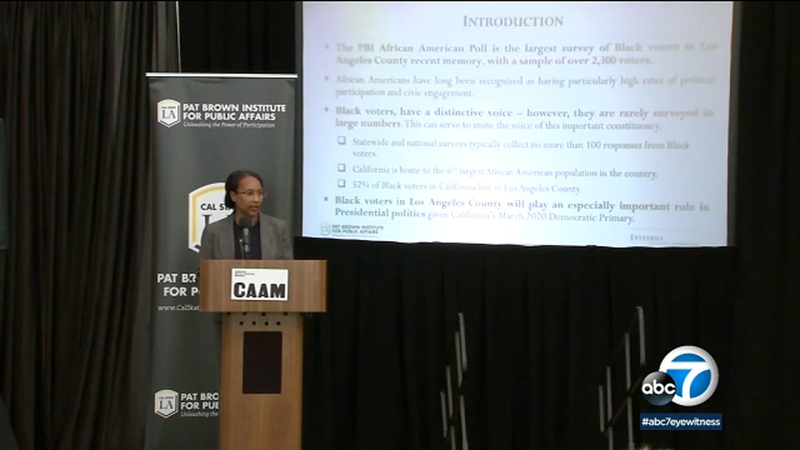 LOS ANGELES (KABC) -- More than 2,300 in Los Angeles County were polled in one of the largest surveys of the African American community in years.

"These are all registered voters pulled directly at random from the voter file," said EVITARUS Researcher Shakari Byerly.

The poll was released by the Pat Brown Institute for Public Affairs at Cal State Los Angeles, and it examined the key issues defining the 2020 presidential election.

It found homelessness was at the top, with 53% saying it's the most important issue, then affordable housing at 44%, followed by transportation, crime and jobs.

"Despite the low unemployment numbers, they're still concerned about whether the cost of living is such that they can afford to stay in Los Angeles," Byerly said.

When it comes to presidential candidates, the poll was taken before the recent debates which analysts say could have changed some of the numbers.

Joe Biden came out on top with 34%. California Sen. Kamala Harris was at 21%, with Bernie Sanders, Elizabeth Warren and Cory Booker in the top five. Even in her home state, Harris was behind Biden.

"The days where a home state senator could walk away with the largest block of delegates in the entire Democratic convention without being contested by other candidates, those days are gone," said Raphe Shonensein from the Pat Brown Institute.