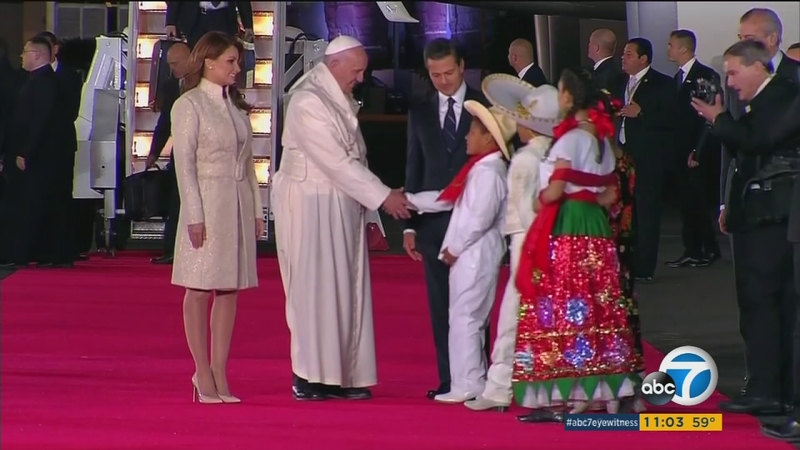 MEXICO CITY (KABC) -- The people of Mexico City celebrated the much anticipated arrival of Pope Francis, who landed Friday for his historic visit to Mexico.

The pope and his entourage departed Friday morning from Rome's airport. Before heading to Mexico, the pope stopped in Cuba. He donned a traditional Mexican sombrero hat he received as a gift by a Mexican journalist.

His first stop was Havana's airport, where Francis met for a short time with the head of the Russian Orthodox church, Patriarch Kirill, in a ground-breaking step toward improving Catholic-Orthodox relations.

It was the first time the pope and patriarch had met in over 1,000 years. "Finally!" Francis exclaimed as he embraced Kirill in the small, wood-paneled VIP room of Havana's airport, where the three-hour encounter was taking place. "We are brothers."

They kissed one another three times on the cheek, and Kirill told the pope through an interpreter: "Now things are easier."

The head of the Russian Orthodox Church Patriarch Kirill, left, and Pope Francis talk during their meeting at the Jose Marti airport in Havana, Cuba, Friday, Feb. 12, 2016.

After the meeting, Francis arrived in Mexico at about 7:30 p.m. local time. He will have two full days of activities, including a meeting with city leaders in the National Auditorium on Sunday as well as a quick speech.

On Saturday, the pope will hold a Mass at Basilica of Our Lady Guadalupe. The roads leading up to the famed church is already surrounded by railings in preparation for the pope's arrival.

Pope Francis is expected to arrive Friday in Mexico, where he faces a jam-packed schedule following his brief stop in Cuba.

Jane Vargas traveled all the way from Mason, Texas, and already staked out her spot behind the railing in hopes to get a glimpse of the pope.

She said this is her first time away from Texas and described the trip as a once-in-a-lifetime experience.

Jane Vargas traveled all the way from Mason, Texas, to Mexico City to be a part of Pope Francis' historic visit.

Francis will be heading back to Rome on Wednesday.