Secretary of State Alex Padilla says it's important that every voter in California make a plan for voting this November.
KABC
By Josh Haskell 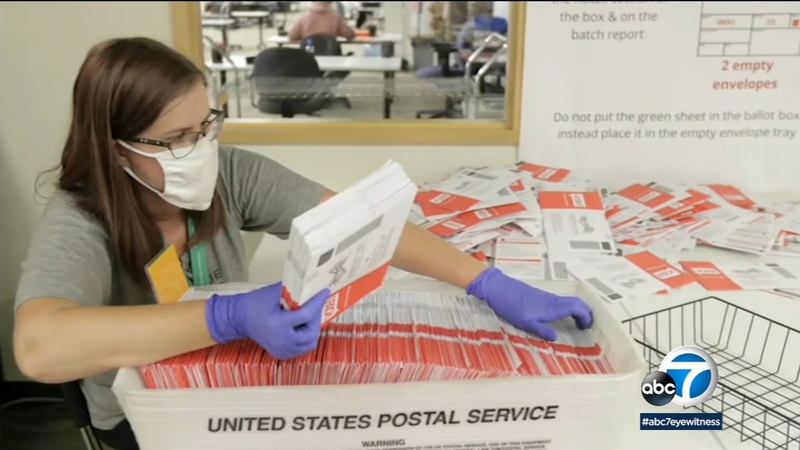 SACRAMENTO, Calif. (KABC) -- The United States Postal Service will be more critical than ever to the upcoming November elections as election officials have deemed voting by mail the safest way to vote during the pandemic.

But the Postal Service sent a letter to California Secretary of State Alex Padilla warning that ballots may not arrive on time in order to be counted.

"While that's concerning, I'm not panicking yet because we built policies in California to mitigate against potential delays in the postal service," Padilla told ABC7.

Those include mailing ballots to every voter in the state 4 weeks before the election and extending the deadline for when ballots have to be returned to counties.

Padilla says as long as your ballot is post marked on or before Election Day, it will be counted. But, President Donald Trump has repeatedly claimed, without evidence, that mail in voting leads to voter fraud. He's also withholding 25 billion dollars in funding to the Postal Service.

"They need that money in order to have the post office work so it can take all of these millions and millions of ballots. Now, if we don't make a deal that means they don't get the money. That means they can't have universal mail-in voting," Trump said.

The U.S. Postal Service is grappling with customer complaints of delays in mail service as the agency faces financial challenges amid the coronavirus pandemic.

"Voter fraud in California and across the country is exceedingly rare and that tells us that our current safe guards are working. Trump's attacks on vote by mail and concerns about rigging are really his confession. He's the one trying to rig the system by undermining the postal service. They're flat-out lies," said Padilla.

"We're having major issues with orders that our customers are placing with us that we send out via the postal service. Boxes are not getting delivered. it's been two weeks on something that should have delivered in two days. The fact that packages are taking a week or two for a 2 day shipment is very concerning," said Perales.

So why is this happening? In an interview, postal worker Omar Gonzalez blamed moves made by the postmaster general, who is a Trump appointee and a donor to the president's campaign.

"The postmaster general came out with a policy that trucks have to leave the processing plants whether they're loaded are not," said Gonzalez, the American Postal Workers Union's Western regional coordinator. "There's been operational changes in regards to staffing, hours, working conditions. They've gutted the operation, tarped the automation equipment. It's not that hard to connect the dots.

"The postal service is always working on efficiencies, but those efficiencies they've put in place this time aren't reaping any benefits for the agency, it's costing them money."