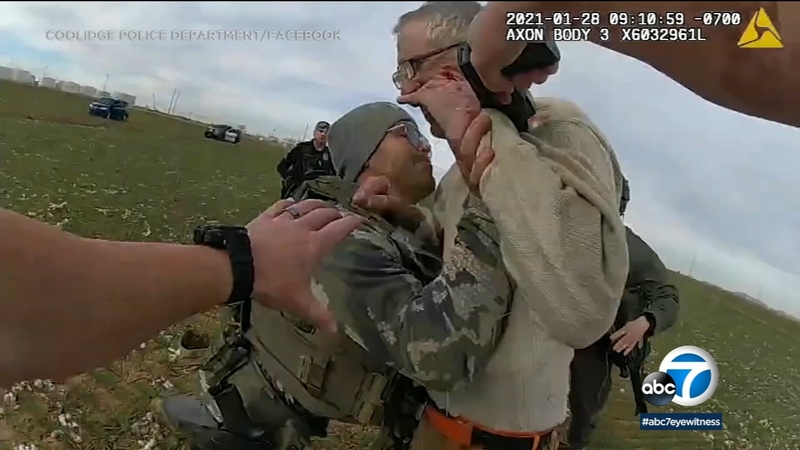 COOLIDGE, Ariz. -- The two inmates who last weekend escaped from a state prison in Florence, Arizona, have been apprehended in a dramatic confrontation that was recorded on body camera video.

The U.S. Marshals Service said some of their marshals were in Coolidge Thursday morning on an unrelated case. The marshals first went to the Coolidge Police Department to check-in, as is normal practice.

While there, Coolidge police received several calls from witnesses who reported seeing the two inmates, David T. Harmon and John B. Charpiot, at around 9 a.m. in a cotton field near Randolph and Vail roads. Two witnesses said they had a view of who they believed were the outstanding fugitives.

Joe Marquez, one of the witnesses who called into the authorities, said when he spotted the duo, he knew it was them.

"I got 911 on the phone, hey man I got the convicts. 'How do you know it's them?' I just know it's them. They won't be out here in that color of clothes if it wasn't the convicts, still wearing orange and white tops and a little bit muddy," Marquez told the dispatcher. "One guy was staying ahead of the other guy. The guy behind was tired, he'd get down on his hands and knees and threw up; really worn out."

The U.S. Marshals and Coolidge officers responded to the field and set up a perimeter. When they spotted the two in the field, officers gave them commands and the two did not comply.

Coolidge officers deployed Tasers and the U.S. Marshals tackled the inmates, taking them into custody. They are now at the Pinal County Detention Center, waiting to be taken back to the Florence prison.

Parents in town breathed a sigh of relief when they heard news of the capture.

"It's kind of scary, hearing about them and having to look over your shoulder every time you go outside," Coolidge mother of five Kacy Vick said.

Harmon and Charpiot had both missed their official count at around 8:30 p.m. on January 23. The Arizona Department of Corrections, Rehabilitation and Reentry said the last time they were accounted for was a little more than four hours earlier. The preliminary investigation shows the men moved an air conditioning unit, broke into a tool room and then used those tools to break out of the prison.

After escaping from the prison, the Arizona Department of Public Safety says the two inmates tried to rob a business. DPS released surveillance photos of Harmon and Charpiot at the Green Tree Inn in Florence, less than a mile from the prison.